We started August where we finished July – la Peyrade – and settled in with a live-aboard community, cycling back and forth to the Intermarché supermarket and the Brico. Stewart fitted grill vents above and below the fridge to help it breathe; I generally pottered. (I’m good at that!)

And our new friends were not all human or canine – a preying mantis took a fancy to Stewart’s bike, but we persuaded him off before he took a trip with us! 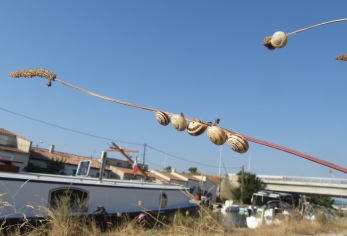 And snails made long journeys to the ends of grassy stems to wave hello.

We had hopes of the new batteries arriving on Friday 3rd, but no delivery email arrived so we went out for the day on our bikes to Balaruc-les-Bains, a fascinating village opposite Sète.

Stu ersting in the garden shade

Another swim for Lesley

It has been famous since Roman times for its thermal springs, and has a spa history up to the present day. It was a very hot and tiring (for us) cycle ride, but drinks, a good meal and a swim/paddle in the Med made up for it all.

One more evening and day at la Peyrade saw us waving goodbye to our new friends Christian and rasta Anna and her three dogs as they sailed off into the Étang de Thau to test her yacht prior to a voyage to Greece.

5th – 7th back at Frontignan

Next day, Sunday, we moved the 2 kilometres back to Frontignan canal port where our new batteries were due to arrive at the tourist office next day.

We set to work to remove the six old batteries, each weighing 60kgms, from behind the stairs in the engine room. Two oldies with a combined age of 136 managed to do this in a 32 degree day, with the help of strategically placed lanyards, lots of rests and lots of water!

We celebrated with a beer in the square under the plane trees followed by a demi-pizza and salad each – a menu combination we both approve of.

Whilst we waited for the new batteries to reach us we watched the comings and goings of all the craft going under the lift-bridge that only opens for a few minutes three times a day. It is always an interesting spectacle, as some boats do not understand the procedure of allowing downstream boats to come under the bridge first!

One of the best sights however was not a boat going under the bridge, but a boat that arrived with swimmer power! 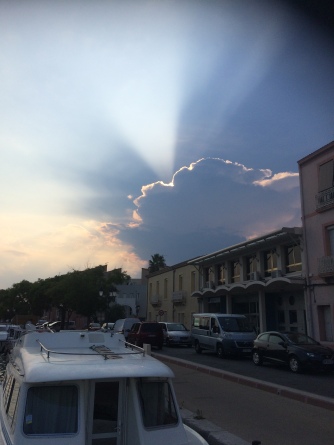 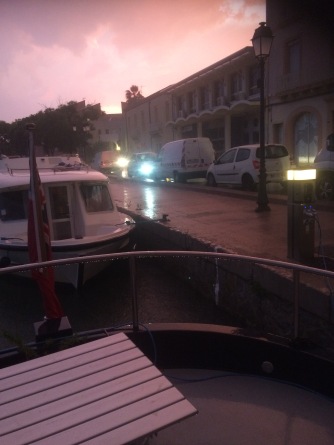 We had a powerful thunder and lightning rain storm while we waited – much needed refreshment form the 33 degree temperatures!

Over the next few days I managed to see the old batteries to a scrap metal yard, have them collected, and, with the help of some French boating friends, we got the new batteries to the boat.

Time for another celebration – this time a beer under the plane trees followed by a Vietnamese meal!

Stewart and I reversed the procedure for removing the batteries, and again using the lanyards lowered them all into place. Before long my Chief Electrical Engineer (Stewart again!) had wired them up, and at the 1pm opening of the Frontignan lift-bridge we were off east ……

….. past the pretty wooden sail boats we had been moored next to on the quay.

8th one night near Pavalas-des-Flots 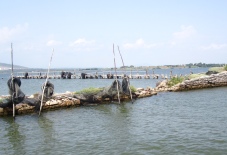 Our travels along this section of the Canal du Rhône à Sète were picturesque, cruising along a canal that has been built in the middle of a series of lagoons, with flying flamingoes, wonderful ‘waterscapes’, fisherman’s shacks, and no locks to divert us.

The hoped for mooring, until we came adrift

We had hoped to moor up near the old cathedral on an island at Maguelone, but it was too busy so we continued for a while and found a perfect wild mooring. We tied up to two posts, plus two of our stakes, and settled down to a gentle afternoon and evening – until a commercial barge, travelling very slowly and considerately, came by and pulled out our stakes and the two permanent posts! Whoops!

So onward another kilometre to the outskirts of Pavalas-des-Flots where there were some proper bollards for the night! (Certainly not pretty enough to photograph though). 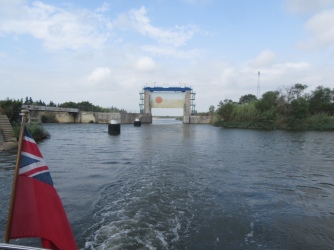 Another days cruising, past the giant ‘doors where the canal crosses the river Lez,  brought us up to the outskirts of Gallician where there is a small port, but, from a distance, it looked full.

And then we suddenly saw a short section of sturdy wooden fencing right on the canal bank, and perfect for mooring!  Our luck was in. 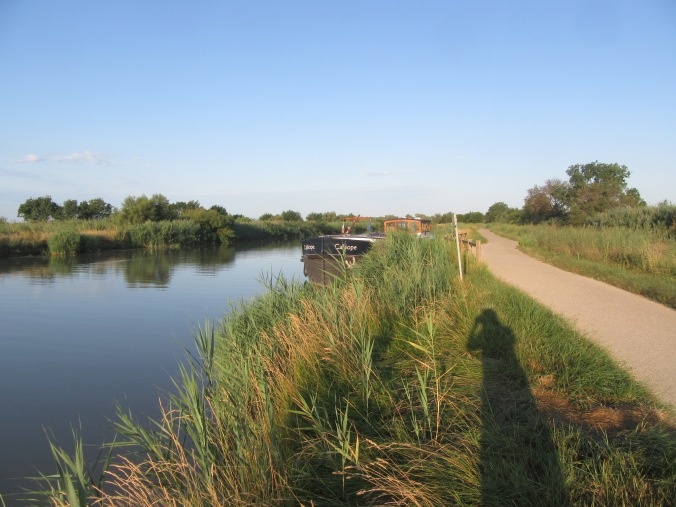 We arrived just as a downpour began, washing all the dust and salt water from Calliope’s decks. (Photo taken next morning). By the time the skies had cleared I had managed to check the configuration of the new batteries to our monitoring systems, and convinced myself they were correct (thank you MasterVolt Support and all the Piper Barge Owners who advised me).

Time for another celebratory drink. 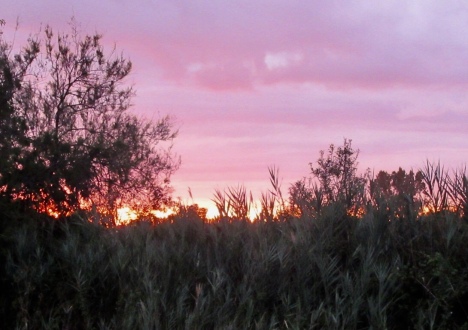 And another glorious, slightly stormy, sunset.

We thought we would stay just the one night, but the flow on the Rhône had increased because of major thunderstorms to the north so we stayed a second, with the open Petit Camargue the other side of the canal and interesting bird life coming and going. We saw king fishers, bee eaters, purple herons, stilts and night herons too, plus many we could not identify.

With the flow on the Rhône decreasing we set off through the St Giles lock onto the Petit Rhône, hoping to moor just at the end where it meets the mighty Big Rhône, but that was taken so moved out onto Le Rhône itself and went to look for a mooring suggested to us by Swiss boating friends Alfred and Heidi down in Arles.

CAtaon surveys the river at Arles

We found it, tied up, and decided to go and look at the old town across the river. It all looked beautiful, and I knew it had a Van Gogh history. However as we set off we were concerned to see a potential ‘ne’er-do-well’ watching the barge, so cut our visit rather short.

Part of the Van Gogh trail

Nonetheless it is an attractive town, worth a proper visit I think. And all turned out to be fine on Calliope. 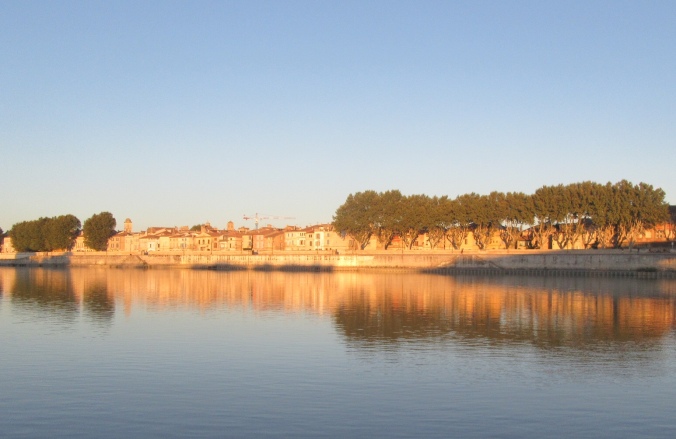 As the sun dropped in the sky, Arles appeared to float in the golden light – gently psychedelic.

So we begin our trip north on the Rhône, initially still in the South, from Arles to Avignon.

We began to pass the varied forms of energy generation on the Rhône, including wind and water in various forms. 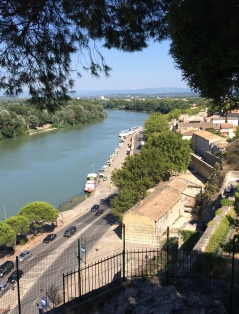 View down to Calliope

Trying to make up for lost time due to the battery renewal and Rhône flow we thought we would just have one night at Avignon. We planned to make the most of it, with a climb up to the gardens above the river, then a saunter through the touristy areas around the ostentatious papal palaces, and a pleasant explore of some of the quieter narrow streets. 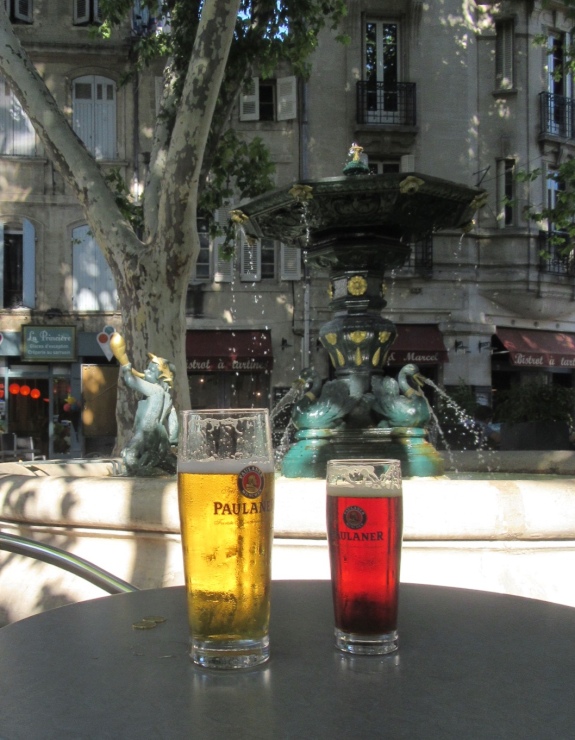 Surprise surprise we ended up in a square (actually a triangle) under plane trees with a beer!

Next day we discovered that over the next 48 hours there were to be thunderstorms and a mistral wind, so plans were changed and we stayed on, at great expense, for a further 2 nights. 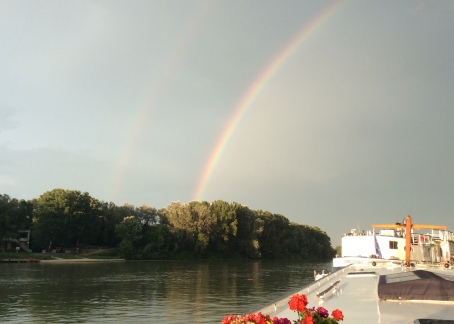 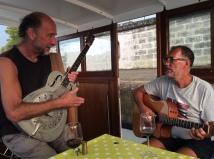 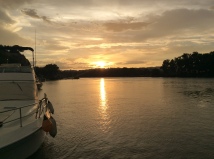 The first of these took on a musical tine when our new friend Rheinhard, from a boat that had been travelling with us, came round with a litre of good red wine and his guitar. Stewart soon dug out his steel guitar and I was the total appreciative audience! The rain came down and the lightning lit up the skies; we were snug with our music and wine., and ended up with rainbows and sunsets.

Stu and I further explored Avignon on our third, windy, day there, including one of the best Les Halles indoor markets I have found.

I managed to spend a few euros on some interesting food before we left! Sadly I did not buy Porchetta, but got some good rillettes de porc, some very good cooked tongue,and a delicious Saint Jacques scallops) dish, at a high cost.

Then, with all forecasts for wind, flow and sun in our favour, we began the real trip northwards, leaving Avignon and its famous bridge behind us.