A serenely serendipitous situation; we had just tied up at the lay-by for Shiplake lock, and were obviously in for a bit of a wait, so catching sight of yet another pair of coots building a nest just a few yards from the lay-by I picked up the camera.

I have rather a lot of similar photos, but this time the nest was in the reeds, and all green. No empty crisp packets or bits of rubber hosing in this nest construction!

Then as I waited for Mr Coot to return with the inevitable building material offering ……… I noticed a tiny red and yellow punky head peek out from below Mrs Coot!

She had a baby in the nest! Hooray. I have spent all summer trying to get a clear photo of a baby baby coot – and everything so far has been distant, blurry and frankly useless.

As I watched I became aware of the shrill squeek of a hungry young coot demanding food. It was coming from further along the reed bed.

Wow! ….. the first hatched of the brood had already ventured into the water and was making his hungry presence known to his father. This was one determined young creature, out to grab any morsel of food before it reached the nest and his (or could be her) siblings.

Back in the nest, Mrs Coot was apparently feeding egg shell to the other babies. I don’t know this as a biological fact, but it is my take on what she has in her mouth.

Her fascinating feet are so big, and protective, next to her young brood all bald as a coot! 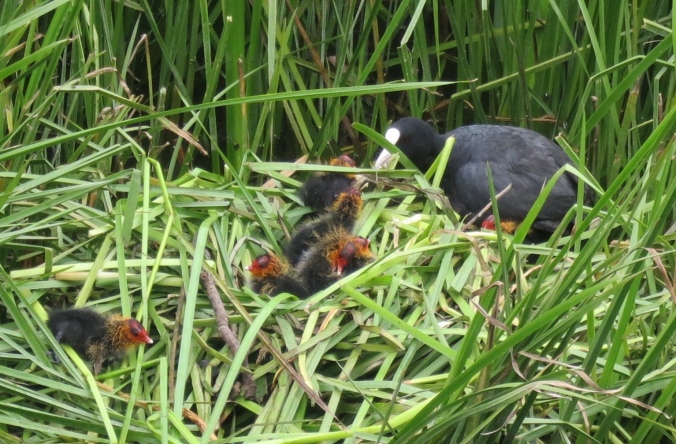 …… always on the watch for dad with some food!

He’s the adventurous one, off exploring again, then return to mum to nestle in for a rest.

Sad to leave them, and I have every finger crossed that at least some of the chicks survive the predatory pike, mink, buzzards, foxes and others higher up the food chain. 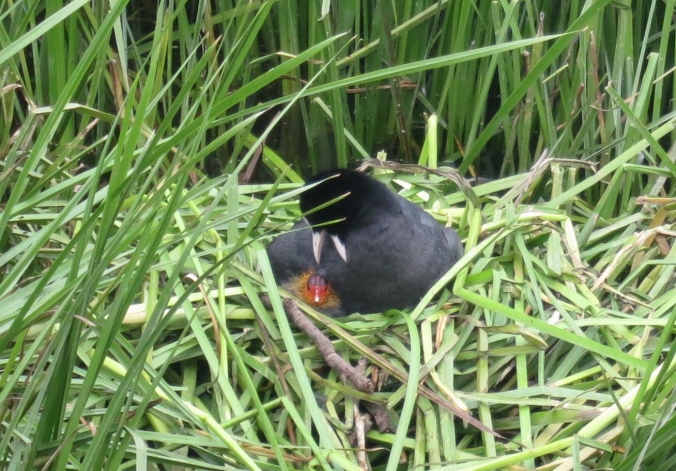 …. with feathers all stubby and brown

But, and sorry to use such a trite word, they are so cute!  They are amazingly fluffy with their baby down, not yet able to shed water as they will do from their future feathers.

We have been lucky enough to see them at many stages of growth, usually brought to the boat for a photo shoot by proud parents! 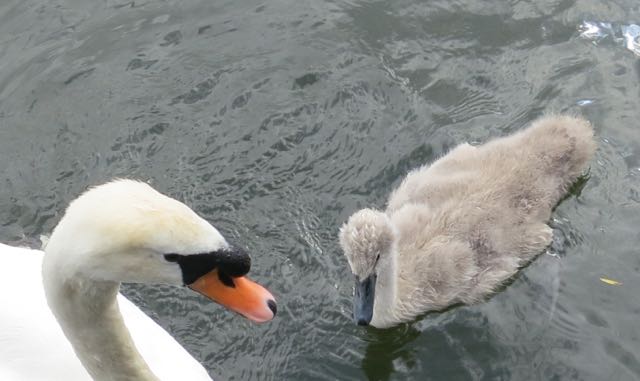 There has been so much on line and in the media generally about NOT feeding them bread, so I have tried them on sunflower seeds and sweetcorn ……

…. which the cygnets sometimes manage to pick out of the water before they (the seeds and corn!) sink too low to be reached by short young necks and beaks. I have loved how the parent swans hold back from feeding themselves while the young are eating, and seeing off any predatory ducks or geese who think they will join in on feeding time.     They seem to start quite pale in colour 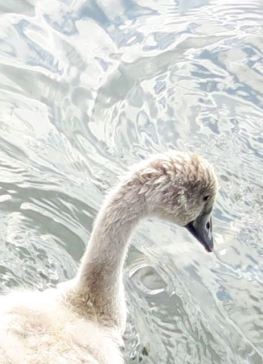 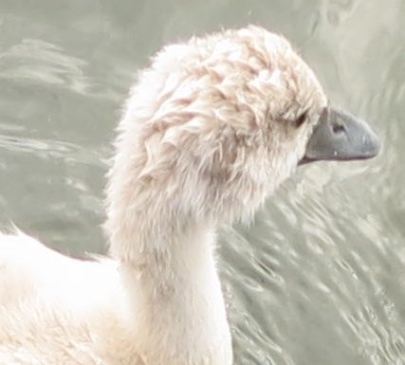 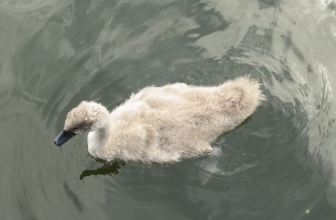 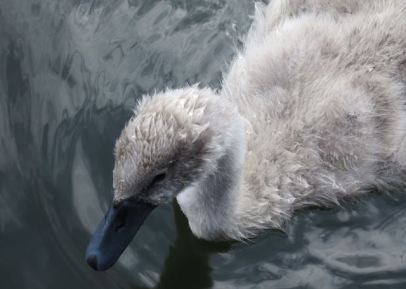 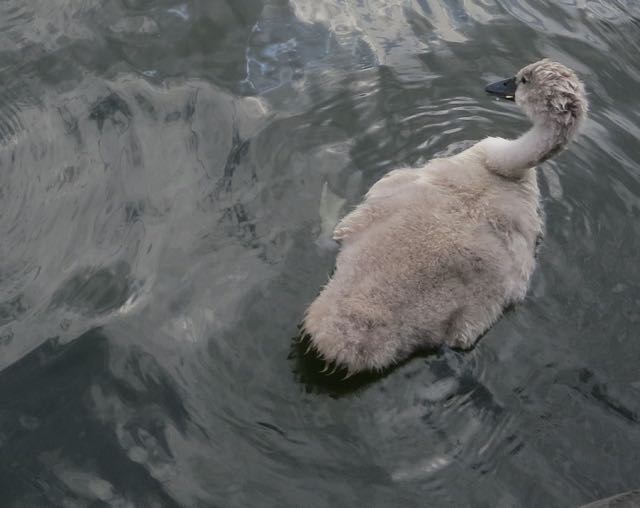 ….. until those famous brown ‘ugly duckling’ feathers arrive, but with the start of an elegant  white neck and more noble head. 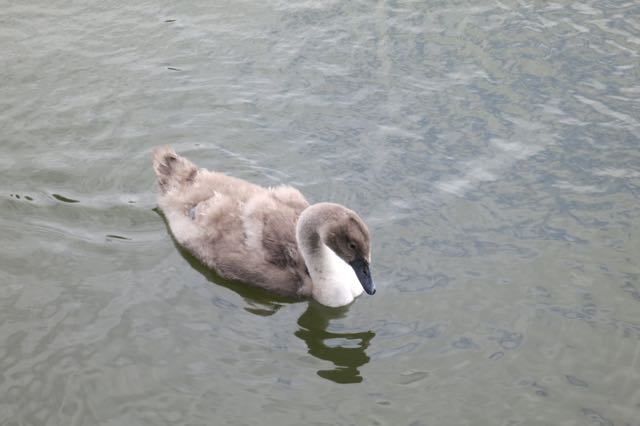 The wings begin to show as the cygnets move towards the beauty of ….. 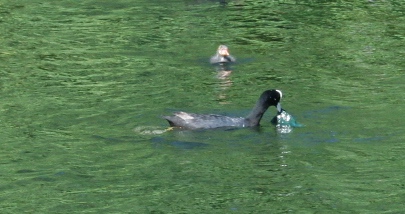 (First of all an apology – I thought the photos were better than they are!)

For all those planning to get to more familiar with coots and their family habits, forget my Amazonian activities upstream. There is no need to swing through branches, plunge into water and spend hours quietly crouched on tree roots. Just head for the East End of London, especially Limehouse Dock and the Regents Canal.   Coots aplenty are waiting to greet you and show off their young, bringing them not only into view, but to your feet!

Of course I was not expecting this wildlife extravaganza, so did not take my camera on the Regents Canal walk. I was accompanying Stewart, who planned to take classic architectural and ‘light on water’ shots ….. 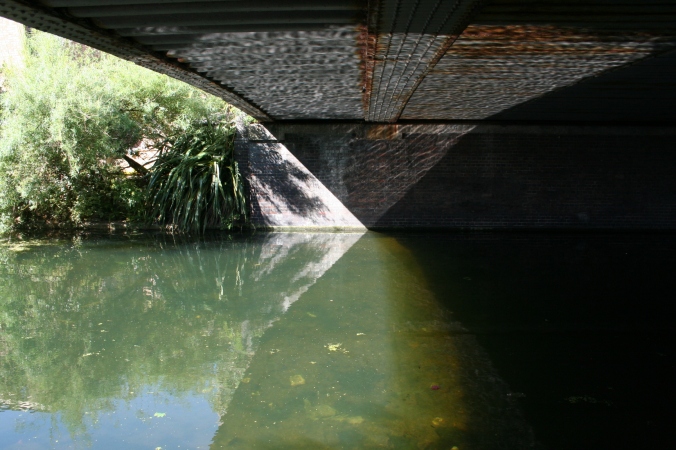 ….. so he was very generous in the amount of camera time he devoted to every coot nest, family and young that we spotted.   Here are a few of his shots ….   I love what they choose to ‘feather’ their nests with down here … empty crisp packets, plastic bags, sodden paper, and bits of floating foam rubber!  The young red headed chicks seem to love their colourful eclectic home.

And how much have I tried to get photos of these little red heads up around Shepperton?? And here they were, in paddling parade just a few meters away.

One thing the older young have in common with their upstream cousins in the noise they make, demanding food from both parents at all times. Mum and Dad swim constantly looking for tasty morsels, sometimes disappearing beneath the surface for the best bits ….

….. leaving the chick waiting baffled, but still noisy, above. 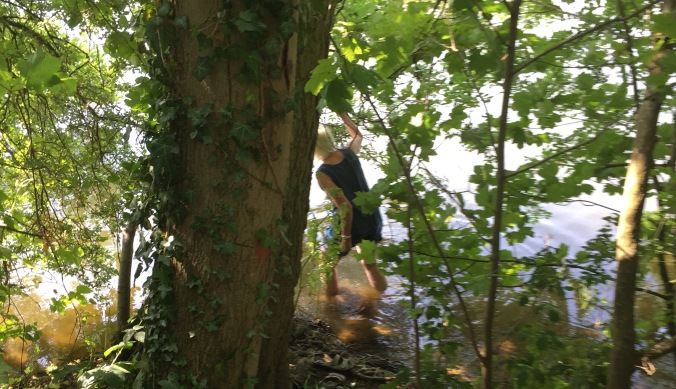 My strategy for enjoying the Thames this summer did not include coots, but I have become ridiculously absorbed and fascinated by these cute feisty birds.

It began a few months ago as I noticed them building their nests, working in pairs to make a safe haven for their eggs and their young.

Capturing photos of the nests was easy …..

But capturing photos of the newly hatched young is near impossible for a fidget like me!  Every time I got within coot-sight of a nest, one parent would quickly and quietly lead the young chicks away, whilst the other parent acted as decoy and swam in the other direction!

When I did catch sight of them, I was amazed to find little black chicks with red/orange topknots on their heads – nothing cootlike in that.

I set myself the task of getting one of these chicks on film (or the digital equivalent), frantically calling to the Captain to slow the boat as we cruised by likely nests, or scrambling through undergrowth to sit with my feet in the river, as still as a fidget can be.

All I have achieved is a few blurred images. 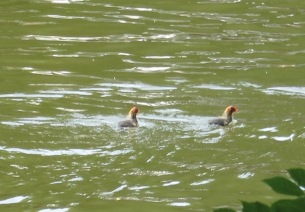 As they grow, they move into the grey stage, losing their striking red/black look, and start to develop those enormous feet!

It seems that the parents then have no choice but to bring them out on the river in full view of all predators to feed them and teach them the rudiments of finding their own food.

Gradually the feathers darken towards black and the little monsters get ever hungrier, demanding constant feeding from both parents! 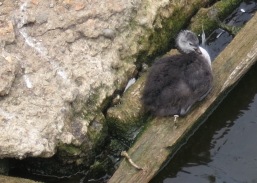 I am not sure what the next stage will be – I’ll keep watching as they develop into the bossy boots of the river, chasing much larger birds away from their breeding and feeding grounds, and stomping their big feet on their territory. 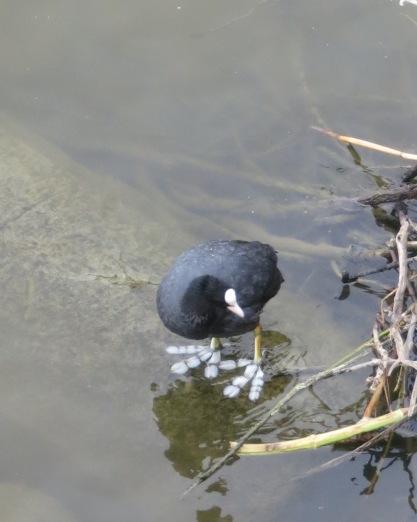 And as I emerge from the summer Thames tangle, I can report that it’s been great fun! 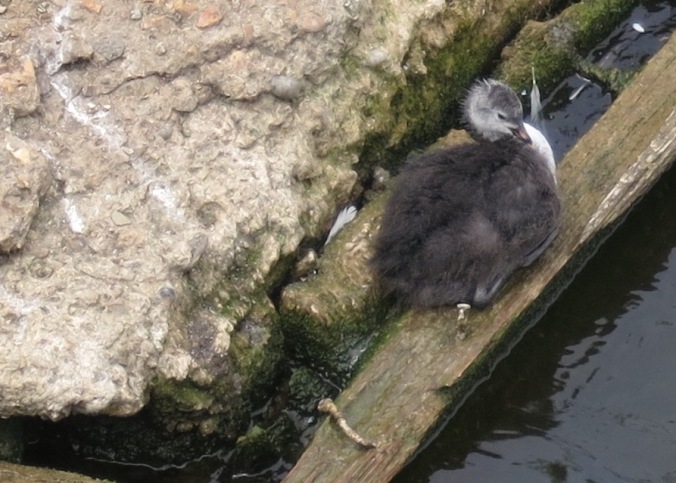 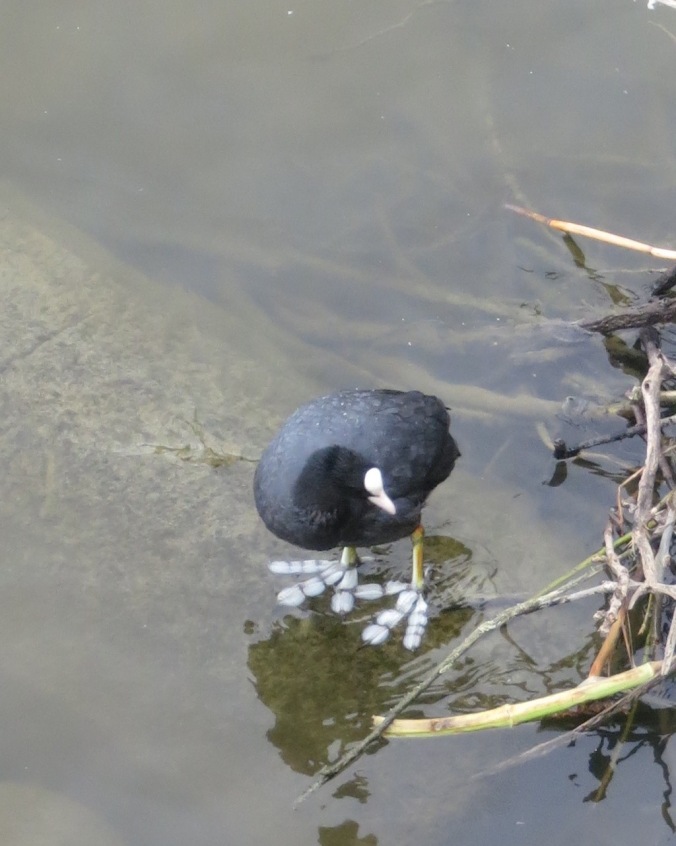