We liked the Saône. It is generally a pretty river and in the southern part there are plenty of places to moor – not so many after Tournus for a biggish barge like Calliope. It would have been easy to spend far longer on the river, exploring towns and villages, but we were on a mission, catching up on the two weeks we lost trying to get new batteries down at Frontignan. 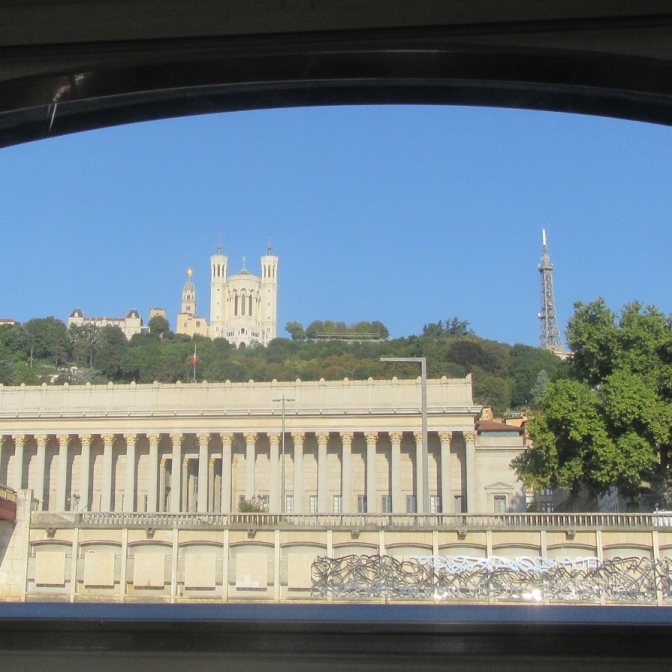 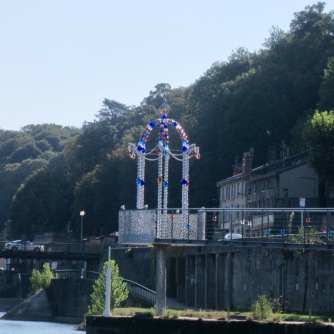 So this chapter is short, and actually quite sweet. We left the port at Lyon in the morning, getting a good view of the city and its fine buildings as we drove through.

All the way along, after Lyon, there were gentle rural views interspersed by old villages, small towns and churches; always something to see. By side afternoon we were ready to find a stopping place, and saw a pontoon at Anse just the right size. 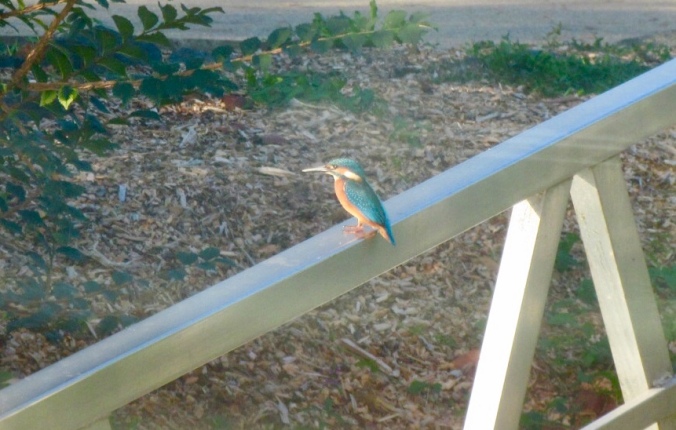 During the evening I went for the short walk to the Anse swimming lake – an exceedingly popular spot on the hot day. And in the morning before we left a kingfisher joined us long enough for me to make a photo through the window!

Despite rather liking the mooring we had only allowed ourselves one night in each place, so next day we were off to Mâcon where we hoped to meet a passing ship (a Westerly actually) from the same Haslar Happy Hour Yacht Club, the antidote to yacht clubs,  that we belong to back in the UK. 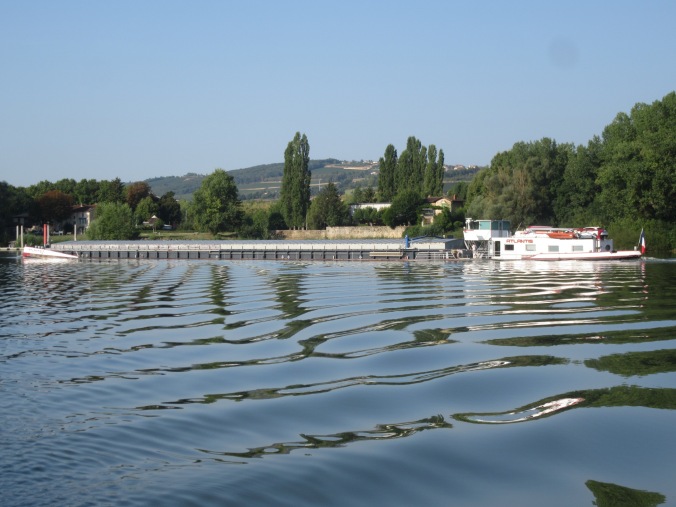 Just before we cast off, yet another seemingly overloaded commercial barge went by – literally looking as if it was under water amidships! 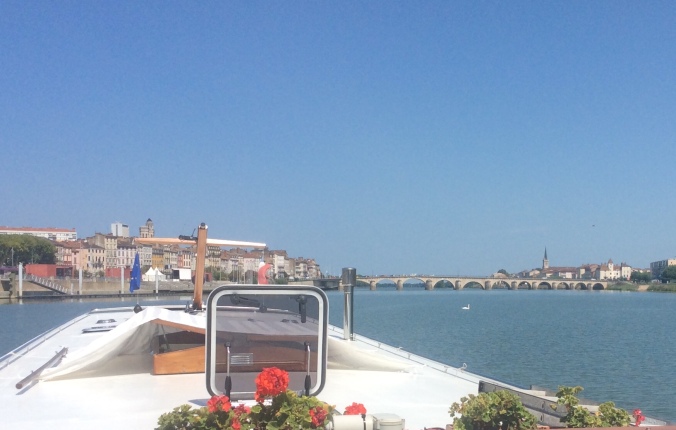 We had heard of a new long pontoon in Mâcon just before the multi-arched old bridge. and heading for it, we found it completely vacant – wow!

Once moored, rested and showered we went into town to meet the crew of Kraken, and there, in mid France and almost 500 miles from the official club house, we had a happy hour or two together.

Our mooring was also popular with local teen-agers, again, who decided that their favourite place on the long long quayside to eat burgers and fries at 1am was the part of the quay adjacent to us!  Ah well, we were also able to enjoy the modern instalation nearby. 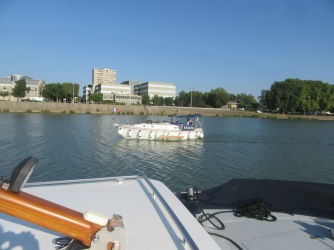 Once more only one night allowed, so on another blue sunny day we carried on north, passing Mâcon’s waterfront houses, and also passing Kraken and crew heading in the opposite direction.

With such a wide space to drive in, and such broad bridges, the cabin girl was able to not only take a turn at the wheel, but go under bridges too! I could even drink tea at the same time.

Our trip was becoming increasingly rural, and a different kind of farming appeared. Dairy and beef herds were all along the banks, with cattle frequently standing in the water to cool down as we went by. Some evidently found us as interesting as we found them! 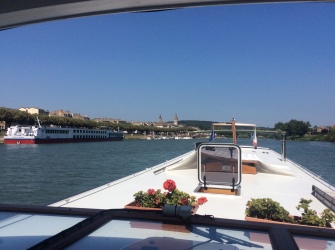 Moored on a flower filled quay

Unusually for us, who spend most of our time as a twosome, we were again heading to meet up with friends. This time it was to see Tam and Di, our ICC barge tutors from 2012 who now have a home not far from Tournus. Once more the mooring fairies smiled on us and there was space on the wharf.

It was wonderful to see them again and we had a lovely evening with a to-die-for prawn rice dish from Di’s famous cuisine and very nice white (or two) from Tam’s cellar. The evening was made complete for Stewart when Tam got his new banjo out and put it through its paces. Happy days! 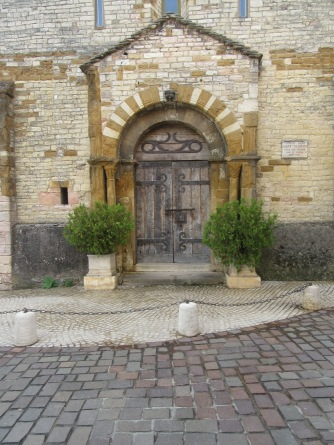 Before we left Tournus the next day I went in search of bread and milk, allowing me a quick walk round in a rather grey light, but enough to show off a little more of the local stonework. 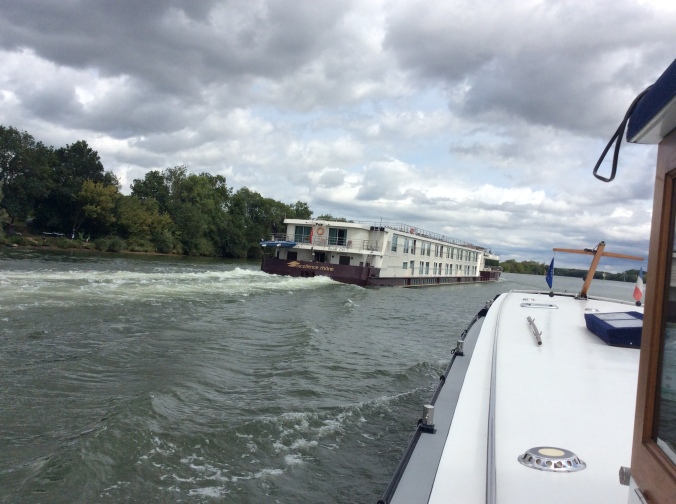 Then on upstream, occasionally left in the wake of hotel barges – bouncy bouncy! 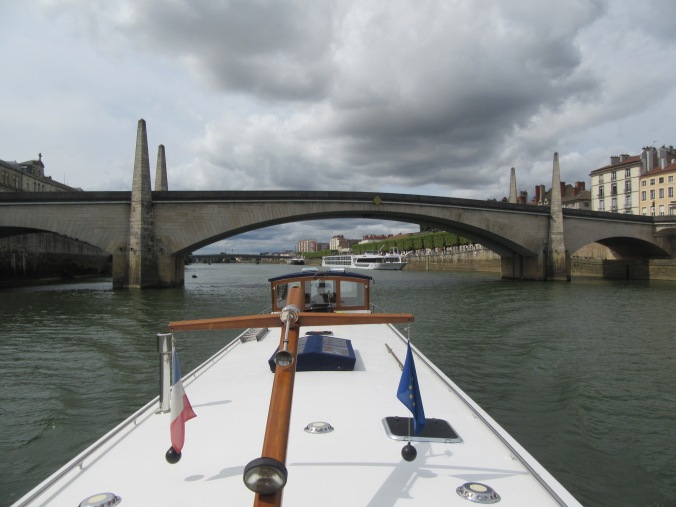 We passed through Chalon-sur-Saône, remembering it form two years before when we had stayed nearby on the barge for a week and had quite a good look round. This time, a whoosh under the bridge and we were gone!

This is when mooring began to be difficult. We had planned a 4 hour day, but after 6 hours and passing by Gerry, Verduns and Écuelles without finding anywhere to moor I phoned ahead to Seurre marina. When they too responded with a “Non, je suis desolée” we decided to try mooring at the lock.

We have heard of many boaters mooring at the big river locks, but have never needed to do it ourselves until now and radioed the éclusier on he VHF. Asking in my very best (Portsmouth High School) French if it were possible he immediately replied ‘Yeah, no prob’ (or something similar) so hence this wonderful, very very tranquil Seurre lock mooring. 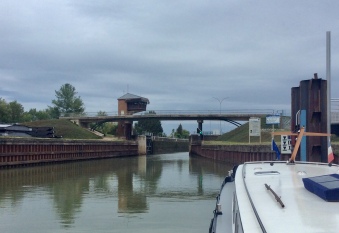 There are several ‘lasts’ around this. It turned out to be our last night on the rivers, last night on the Saône, and next morning it was our last ‘écluse à grand gabarit’, or big gauge lock of 185m length and 12m width. From now on it would be more like 39m x 5.2m!

We were set on a course to buy gazoil (diesel) at St-Jean-de-Losgne so that we could confidently carry on up north and we drew into the fuel pontoon expectantly. But we were disappointed. Despite it being a Saturday in August the fuel office was closed until Wednesday! And the supposed self-service option was out of order! So on we went. 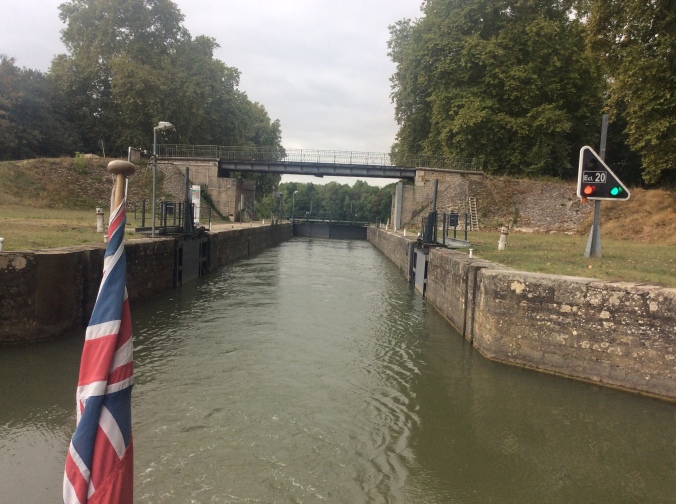 Once more we had plan A, B and C overnight mooring choices. This meant that we went up past Auxonne through the first of the little locks, number 20 at Dérivation d’Auxonne – oh so narrow – and hoped to moor at A ………. no luck.

The skies began to darken in an alluringly velvet manner and we carried on to pass B (Lamarche) and C (Pontailler).

Hmm – nothing for it but to carry on to the entrance to the Canal Entre Champagne et Borgogne, and leave the Saône behind, and we finally reached the turning into canal.

The canal looked so tiny, after the river, but small is very very beautiful. 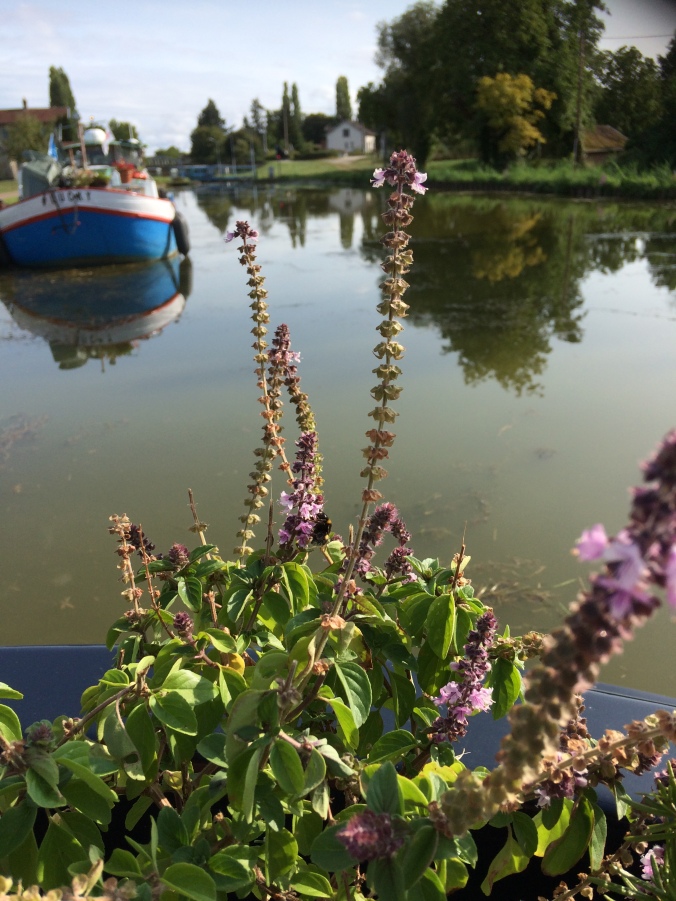 Within minutes we came into Maxilly to find a commercial barge just leaving, thus providing us with a space to tie up. We are off the river and back on the canal system again!