Our trip from Marseillette to PK116 outside Trébes was gentle and meandering, passing by Millegrand and Millepetit on the way. 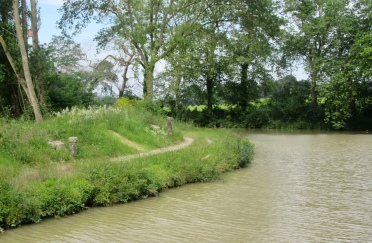 Just outside Millepetit is a steepish bend. In the past the big barges had to be ‘roped’ round these bends and the evidence – a stone pillar engraved with deep rope marks, still stands as evidence of this practise. 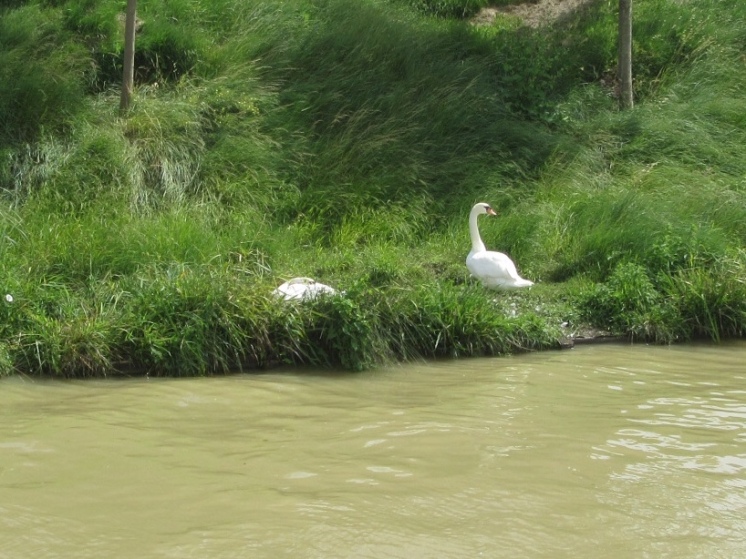 We came up through the Trébes trio of locks just before lunchtime and moored up opposite the swans nest to eat before pottering on to PK116.

We had two nights at one of our top ten favourite moorings, outside Trebes. There is always a mother nature surprise here – this time, on our arrival evening, an iridescent blue beetle.

On Saturday we walked to Intermarche, for vittles and to try to find parts for, or a new, bike pump. We did manage all of these tasks, although the subsequent work on my bike uncovered a perished tyre that no amount of pumping could restore! (Note to self – look out for a bike shop).

There was also the opportunity to inspect the damage done to us by careless holiday boats in locks over the past few days – work to add to the maintenance schedule for Stewart. 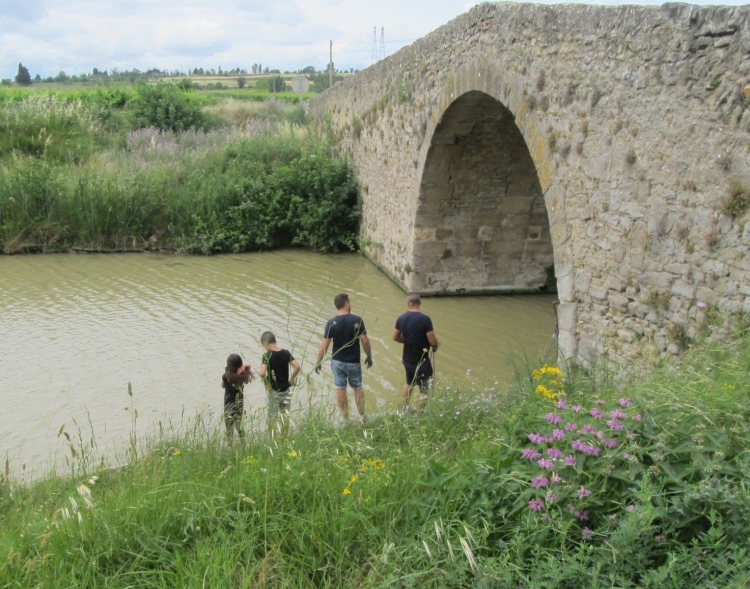 Later that day we were joined in our solitude by a family fishing expedition by the bridge, and then the skipper of MicMac appeared, cycling up from Trèbes to invite us for a beer – an invitation that was postponed until Carcassonne. 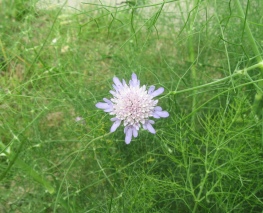 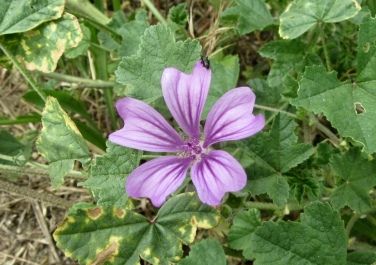 I went for one of my PK116 nature rambles; a few of my flora and fauna discoveries here.

And the day ended with another glass of wine on the back deck and a glorious sky.

While we were at the  mooring we got the stern cabin prepared for our impending guests – grand daughter Hannah and friend Emily. 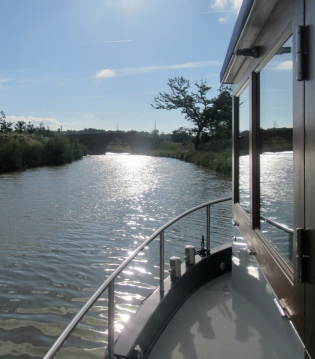 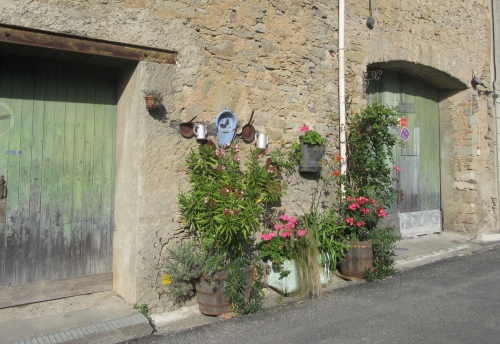 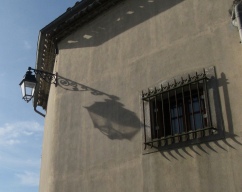 Before we moved on, I walked into the town for bread.  The colours and shadows of Trebes, were wonderful! 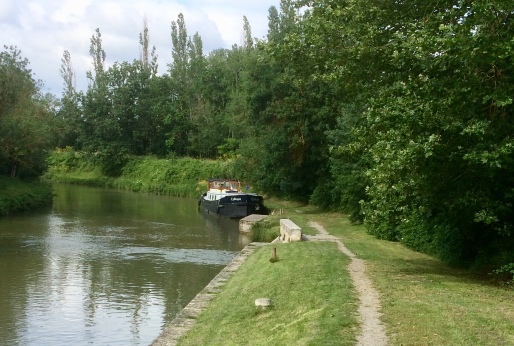 It was a pleasant cruise to Carcassonne, passing through Villedubert écluse, one of our favourites, and past some glorious stonework. 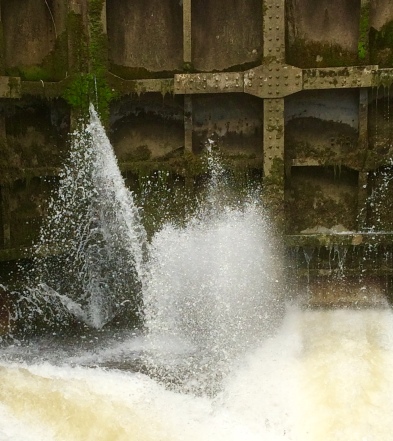 After some ‘fountainous’ locks we arrived in time for lunch. just outside the town, and moved onto our mooring by the bridge early afternoon. It was fun watching the crazy movements of holiday boats coming and going through Carcassonne lock. while we waited for our guests.

Hannah and Emily arrived as planned on the Navette from the airport, delivered directly opposite the mooring at the station! We had delicious pizza on board to end our day.

Monday was hot hot hot. We took a walk to a boulangerie to buy a croissant breakfast for the guests, and left them to explore the town’s narrow streets and little squares. 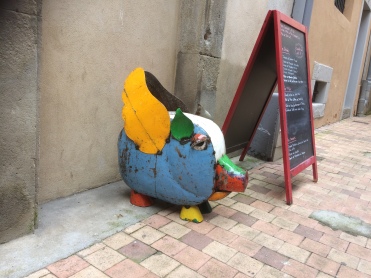 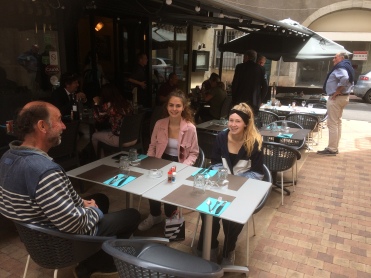 We met up again for lunch, trying the ‘Au lard et au Cochon’  (very nice). It is on a small street off the square, very typical French, lovely salad starters and huge plates of meat!

View of the battlements

After a much needed siesta we all walked up through the town, over the old bridge to le Cité, finding numerous photogenic views. 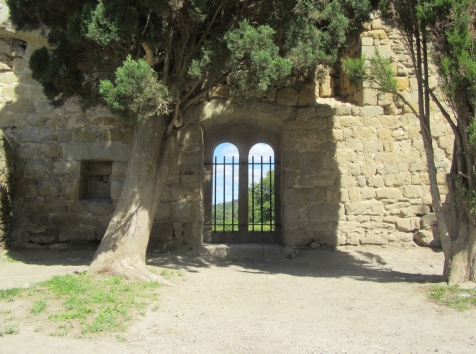 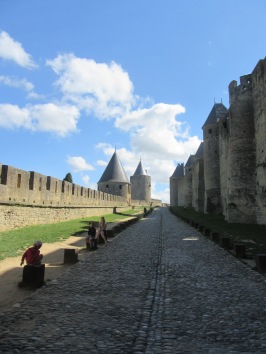 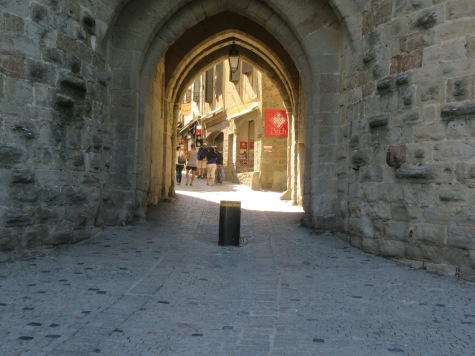 It is impossible to over emphasise the stunning angles, shadows and shapes of this place! Apologies for the enthusiastic amateur camerawoman’s efforts. 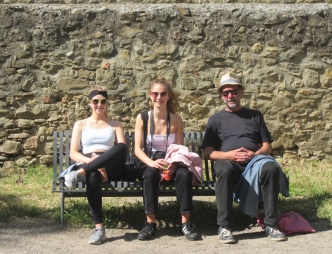 It was hot; it was uphill. We were glad of a sit down!

Those who have been to Carcassonne this year will know that large swathes of the ancient city have been painted yellow! 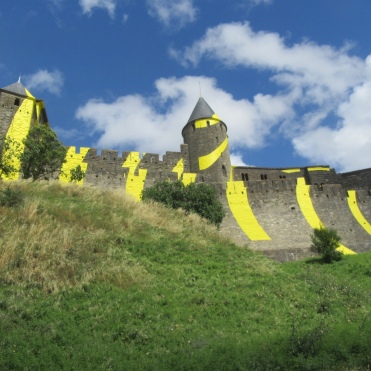 It looks like vandalism on the old stones, but in fact is art.  Get yourself to Porte L’Aude and stand in a particular spot … suddenly all is revealed!  And it is all painted to tin foil that can be peeled off to allow the city its dignity back.

In the meantime MicMac had arrived, bringing the total of Piper barges in a row to three.

Stewart and I had an extremely pleasant beerhour on MicMac while the girls continued their exploration of the city, then off to Irish Bar to watch England in the World Cup (they won).

On Tuesday we were due to move on, so we made a quick trip to Les Halles, the market in square, a boucherie and a boulangerie, to give ‘les filles Anglaise’ a taste of French food retailing.  By 9.30 we had cast off, were safely through Carcassonne lock and out into the country. 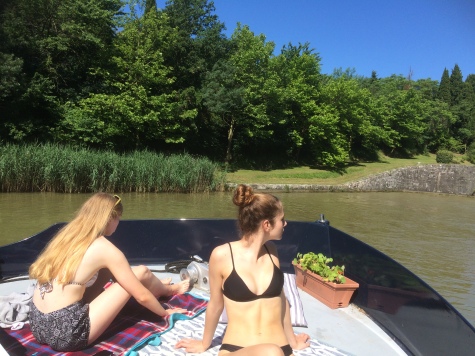 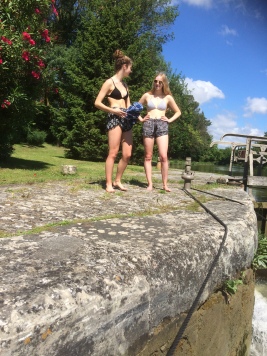 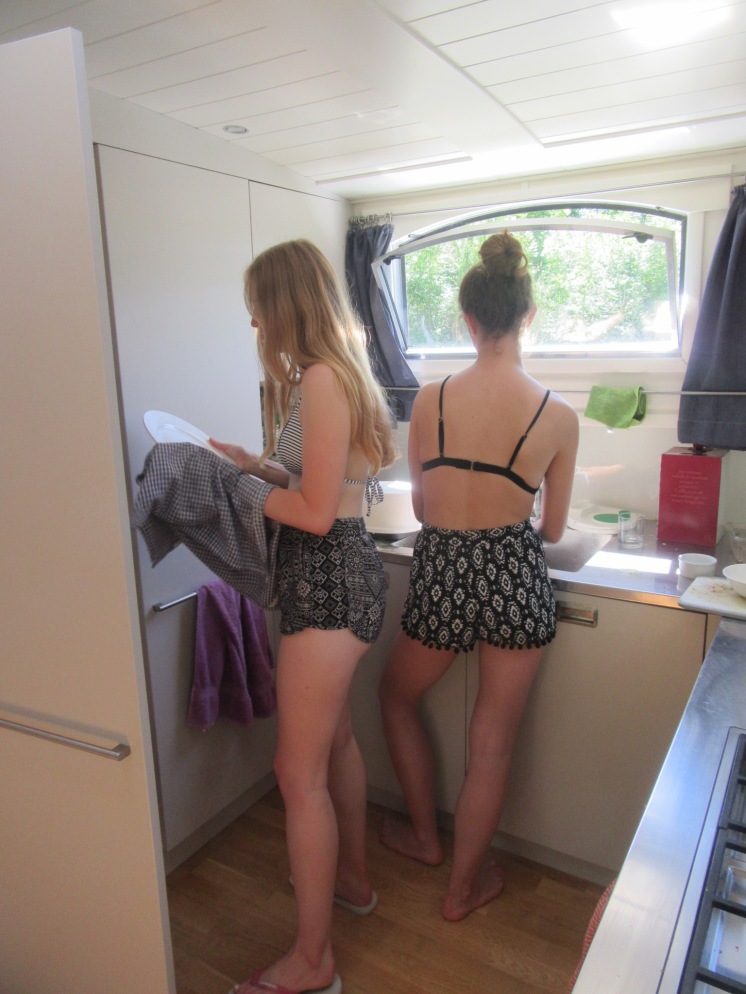 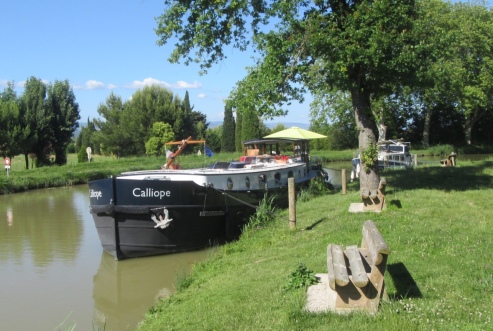 Calliope moored at Villséquelande, another of our favourite moorings. My it was hot! In typical fashion I dipped toes into the canal after sweaty walk to the shop and a sweatier still stagger back with wine boxes.

We had an enjoyable evening mostly on the back deck, with the girls staying through the late night cool air well after Stu and I retired to our cabin.

Hannah, recognising the good evening light, stout with her camera and Emily to record some moments of their holiday. I simply took photos from the barge!  (Hannah got the better shots).

Next day we moved on to a rural mooring near Villepinte – lovely. The young crew searched for river to cool in, but ended up paddling in canal. 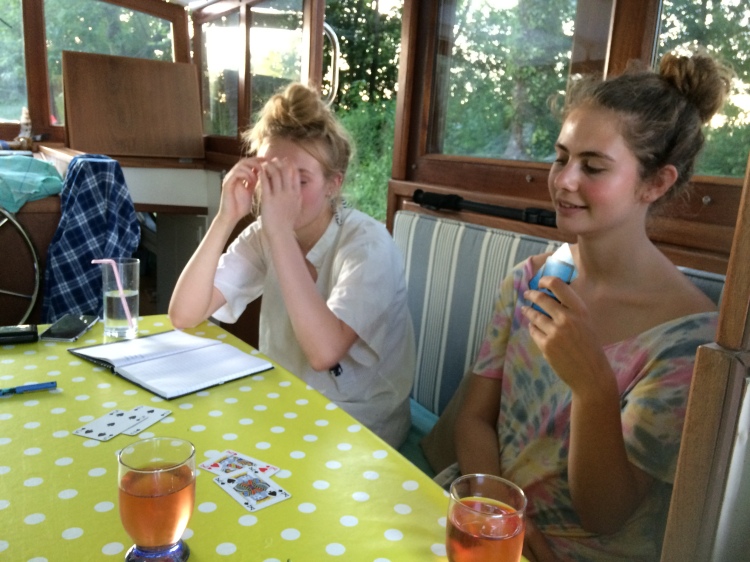 That evening was designed to be our card school – Poo Face and Twenty-One. Someone must have won – but rosé obscures the memory! (The skipper won …..) 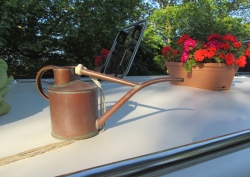 I was up before the Captain – a rarity – and scrambles ashore to take a few ‘morning light’ photos for a change. 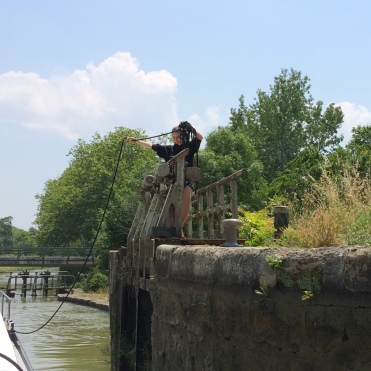 Then on we went for the major trip to Castelnaudary, with 15 locks including double, triple, and even quadruple. The crew were pressed into service once more and proved themselves great matelots in the making, even washing down the deck when we arrived.

So, we tied up at the port, hot! There was disappointment all round that piscine was closed until July. How crazy is that in this hot weather? 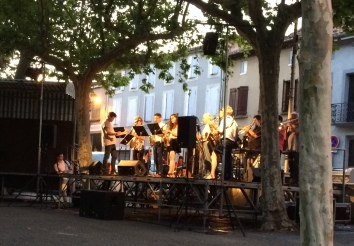 However, undaunted, the crew explored town, then met Stu and I for drinks and pizza before the 21st June music fest got underway.

H and E in festival mood 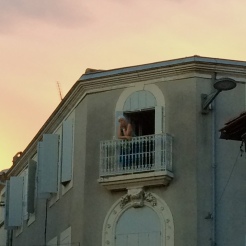 Older residents come out to look

We three females went up to the two squares in town with music – very lively, all ages, great fun. It felt safe so I returned to the boat and let the teenagers alone. 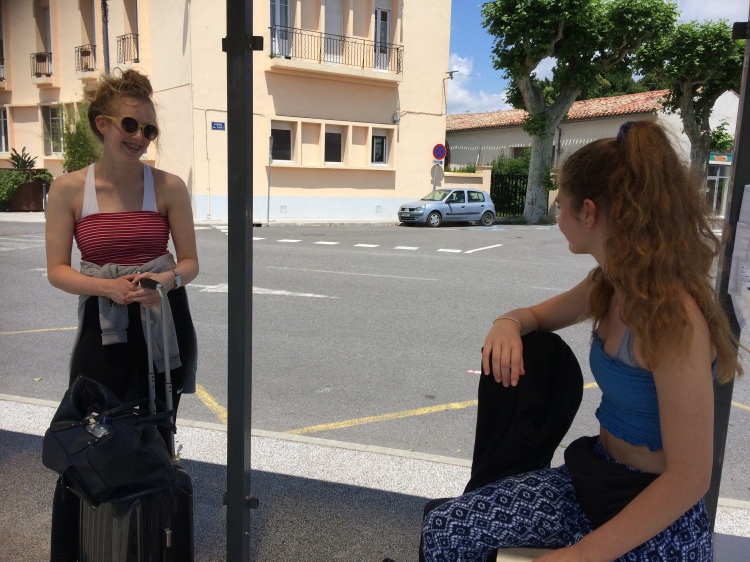 Friday – time for Hannah and Emily to leave. 😕 me too. What with finding a means to reach Carcassonne during a rail strike, packing, feeding/watering plants, checking fire extinguishers, and getting lunch it was not long before I was hugging Stu goodbye and off on a bus with Hann&Em.

Another week away from Calliope for me, and enforced port time for Stu. The saga continues a week from now!

Wife of Stewart, mother of 3, Granny of 6 (yes, I am happy to define myself by my family; I value them more than anything), and living abroad Calliope, our replica Dutch Barge, currently cruising the inland waterways of France, Belgium and The Netherlands. Retired from a couple of enjoyable careers, and now being closer to the real, outdoor me. Love water, fascinated by animals, enjoy music, support Pompey and try to find fun in all parts of my life. View more posts