Deciding when to leave Marseillette is a wind blown decision – waiting for the gusts and gales to diminish so that our progress on down the canal is more enjoyable. 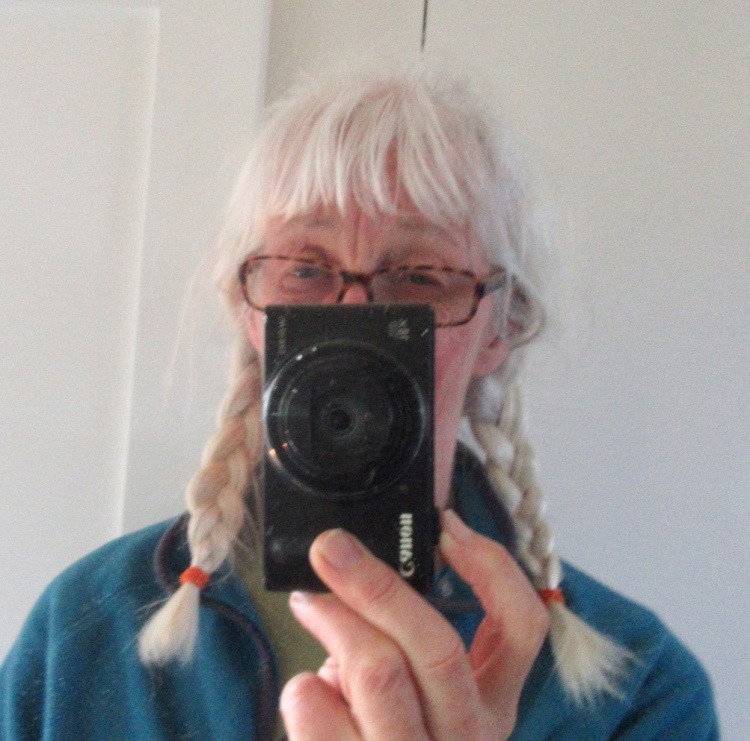 Eventually on Friday, mid morning, the leaves are rustling less and the Red Ensign drops below 90 degrees, so we cast off, although I still needed to travel with plaits so that I could see the way ahead!

We have half an eye on what other boaters are on the move in the hope of having locks to ourselves – not because we are greedy – just makes it easier and quicker. So having glided into the first lock and hearing the gates close behind us we are a little surprised when  they reopen – and another boat appears around the bend to join us.

It turned out to be a group of 6 Australians on holiday – lovely people and good at handling their boat, so all proceeded pleasantly through the next few locks, in company with them. 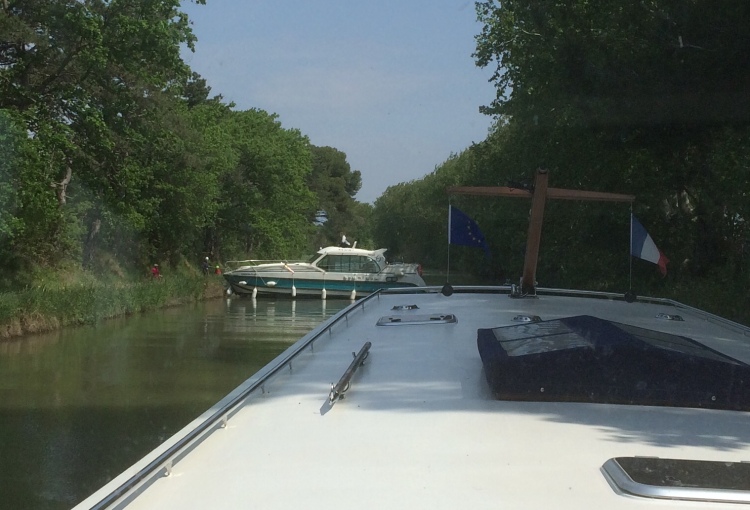 But we did meet less able boaters, including coming upon a luckless family with papa aboard, mama and children in the bank, and the boat across the canal! All was sorted eventually.

We reached the inevitable 12 o’clock-lunch-lock-down at l’Aiguille and enjoyed a blue-sky break before continuing on towards La Redorte – long stretches where ‘the plane trees were gone but the roots linger on., 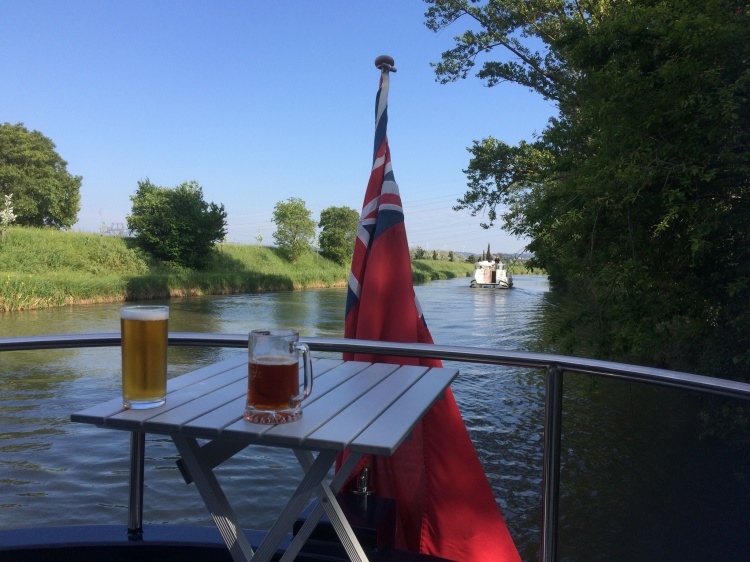 Our luck was in – the best mooring in town, for us, was empty and we were soon tied up ready to enjoy a sunny sheltered few days. 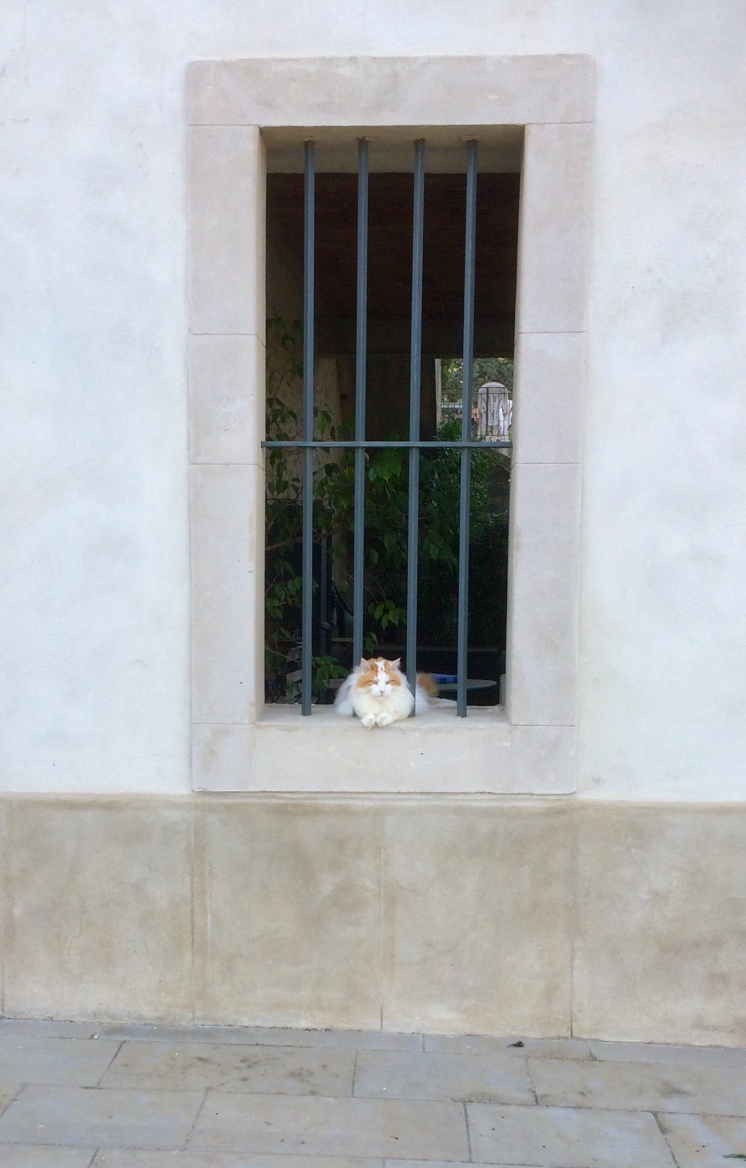 La Redorte is a nicer village than expected – lots of narrow curvy streets up a hill, a chateau, a church, a good boulanegrie and boucherie ……..

A glimpse of morning sun 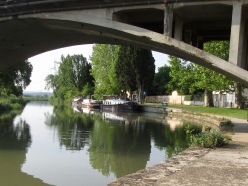 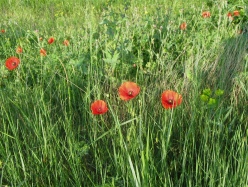 We stayed 3 night at La Redorte, allowing me time for an early sun photo once the weather improved.

Eventually we set out for the wonderfully named Homps, which I now know was a major trade crossroads for tin and wine, dating back to Roman times, and also having a strong connection in the 12th century to the Knight Templars (later of Malta). 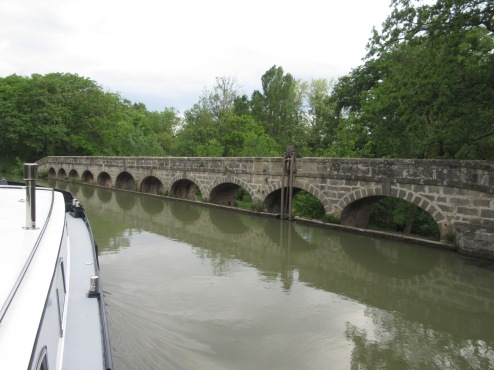 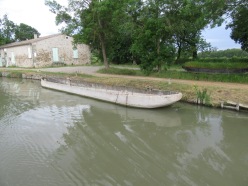 Our route took us past the stunning stonework of the Argentdouble épanchoir, where water can overflow from the canal into the river below when necessary. Then we went over the Argentdouble aqueduct, before passing a buoyancy defying concrete boat. (The Captain has explained the physics of it – so I kind of understand!) 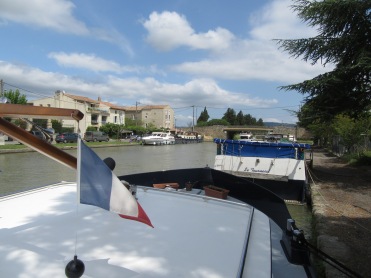 Judicious messaging ahead to friends on ‘Tell Us Tomorrow’ let us know that there was a mooring on the quay in Homps if we were quick! We settled in gently, put the washing out to dry in the continuing wind and went for a walk round the village. 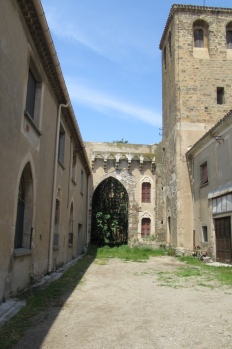 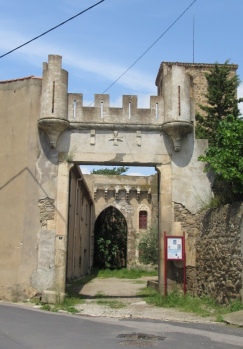 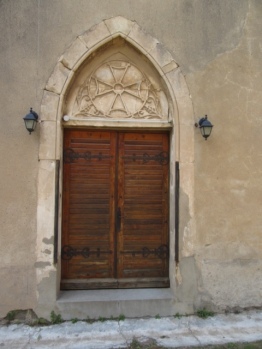 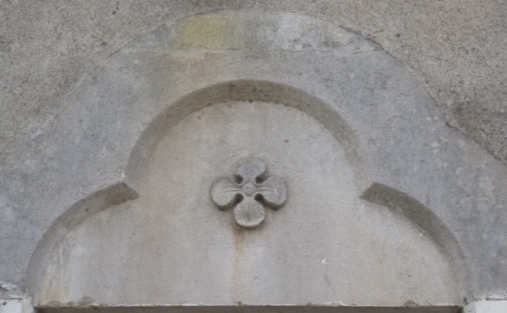 Given my love of Malta I very much enjoyed the centuries long links that Homps has to the island. the Knights Templar’s 12th century stronghold has all but disappeared now, but a few craggy remains are resplendent with the Knights Cross, which it seems to me has transmogrified into the Cathar’s cross.

We were spooked, then amused, by crackly broken music emerging from the village loudspeaker system. This turned out to be the prelude to something more sombre and serious – the village’s commemoration of VE Day – Victory in Europe Day, when La France, so long an occupied nation, was at last freed.

Quite a few villagers turned out to march along the quay behind flag-bearing veterans, then to the church to give thanks.

a picolo picket of rose

That evening we went out for a beer with ‘Tell Us Tomorrow’. This slid imperceptibly (almost) into a decision to dine together at the restaurant no more than 10 yards from Calliope. Delightful, ending up with more wine and a chocolate course on board! Chin chin! 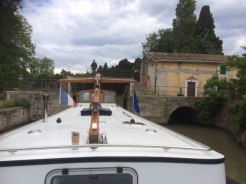 The next day was still windy – really windy* – but we cracked on down towards our planned destination of Narbonne. The Ognon trio is interesting – a double lock into a right hand bend over an aqueduct and immediately through and under a very narrow ‘écluse de garde’ – or means of closing off the canal in times of flood or emergency. *40/50 mph they reckoned on t’web, and they weren’t exaggerating . . .

We waited for the lock in the company of a journeying snail, reminding us that some creatures travel even slower than us, every day.  Hmm, lunch for some over here . . 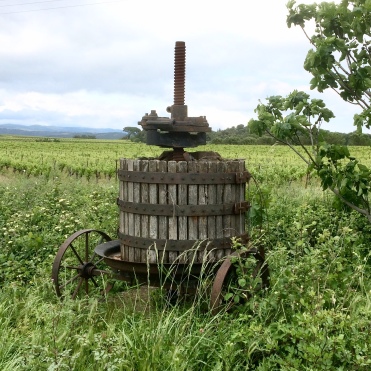 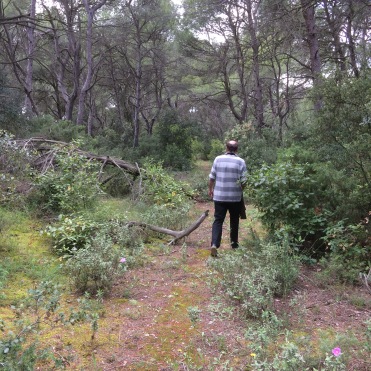 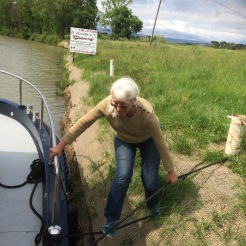 Captain and crew decided that a walk ashore was required and we set off up through woods (nice flowers) and down again, back to a tightrope walk entry to the barge! 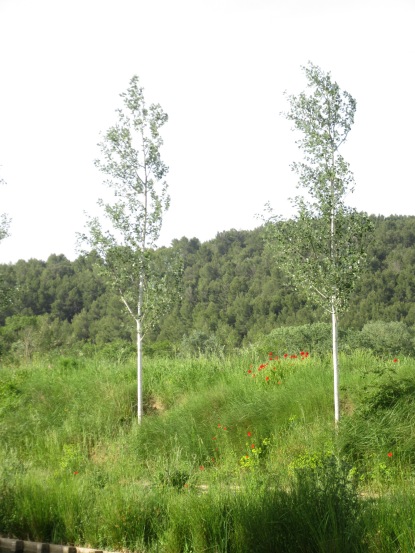 After a quiet night in the wilds we awoke to a seemingly calmer brighter day. A patch of poppies on the other bank suggested that all was good in the natural world and a sure sign that we should journey on. 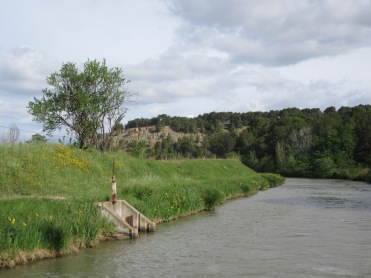 With the sun before us and the rocky hill of yesterday’s walk behind us we felt on top of a blowy world. 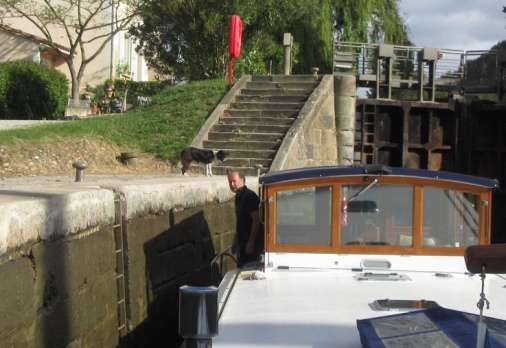 We found ourselves accompanied by creatures once more at the next lock, herded through the double by an enthusiastic collie who was bent on ensuring we could not dodge to either side and get away!  He saw us off downstream very efficiently.

On past Argens-Minervois with its chateau on a hill, Roubia, and then a pit stop at Paraza for bread before going towards Ventenac. 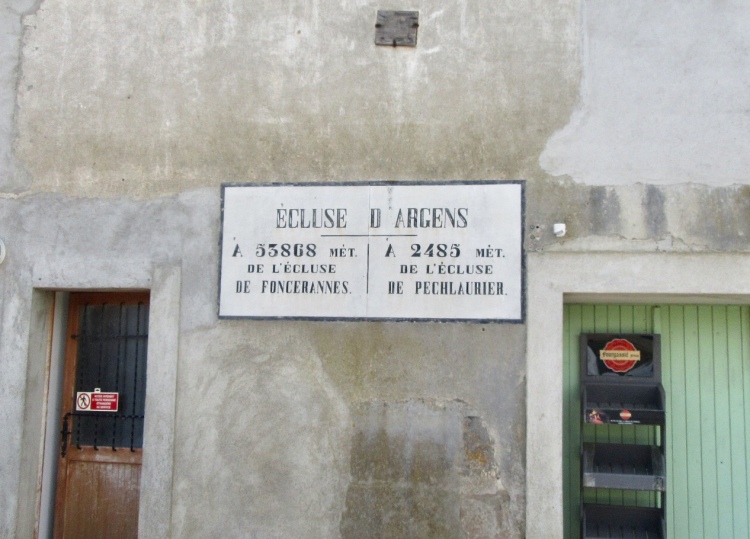 The lock at Argens is the last one for over 58kms. Just as well because our kindness in allowing two holiday boats to go down in the lock before us led to over an hour waiting. The éclusier hoped to fill the ascending lock with three boats, but one that she had spotted distant over the plain failed to materialise. In reality we are so lucky to be retired, with all the time in the world to enjoy where we are while we are there; holidaymakers are always in such a rush . . . . 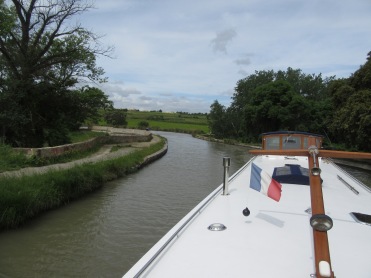 Coming out of it

Just past Paraza is the first ‘pong-canal’ built in France in 1676. It was built by the famous creator of the Canal du Midi, Paul Riquet, who stayed at the chateau on Paraza during the construction.  Its hard to get a good photo as you go over it on a hairpin bend.

Finally, 17 kms on, we got to La Somail hoping for a mooring. Our hopes were dashed as the entire port and quay were jam packed with boats and we realised it was lunch time on a sunny French public holiday. On we went.

I had decided not to take many photos that day, but this section of our trip includes a real mix of ancient bridges, so they had to be snapped up – sorry!

So at about 1.30pm, after a long day for us of four and a half hours travelling (old retirees that we are), we arrived at Port la Robine where the canal to Narbonne leads off from the Canal du Midi.

And we were so lucky – the little mooring area before the first lock was full, so we tied up in the wide mouth of the junction and found ourselves in the perfect spot – for the next  fifteen and a half hours.

We had our own little patch of flowers and a bar across the bridge – a heavenly sunny evening.

Fifteen and a half hours later, at 4am, the tranquility was broken as the factory across the canal started up its machinery after the holiday!  But a rude awakening led to a lovely morning view from the wheelhouse.

We climbed the bridge to look at our voyage for the day, down the Canal de Robine towards Narbonne – another week was about to begin.

Wife of Stewart, mother of 3, Granny of 6 (yes, I am happy to define myself by my family; I value them more than anything), and living abroad Calliope, our replica Dutch Barge, currently cruising the inland waterways of France, Belgium and The Netherlands. Retired from a couple of enjoyable careers, and now being closer to the real, outdoor me. Love water, fascinated by animals, enjoy music, support Pompey and try to find fun in all parts of my life. View more posts