Funny the things you see when you are heading on the opposite direction! 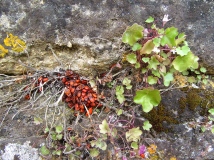 For example we found beetles amassing at Le-Mas-d’Agenais on the old walls of the village.

And I found time to walk across Le-Mas-d’Agenais bridge in the day time and take a mid-Garonne selfie.

The bridge is a triumph of engineering from 1837, taking traffic across the canal and the Garonne on one majestic sweep.

We had passed and noticed the Esperance on our Westward voyage, but no graphic evidence survived, so I was pleased to get this photo on the way back.  So sad that a barge named Hope is now in this state – but I guess there is still hope that someone will revive her. 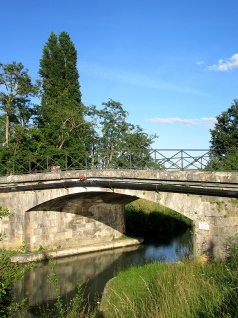 We didn’t moor at Villeton on the way through, but managed to secure a good partially shaded mooring against a high wall on the way back. The bridge is typical of the Canal de Garonne, stone built with a beautifully balanced arch. 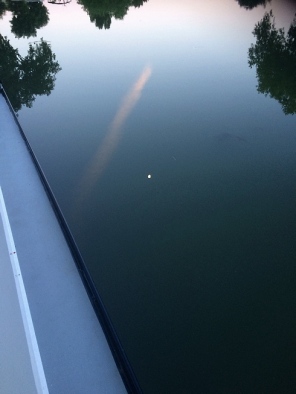 That night the moon was elected as a pinprick of light in the darkened waters.

We decided that it was not too far to walk to Tonneins from Villeton and see the old Gauloise factory and the Garonne.  It was further that we thought on a busy road and on a hot day! We did make it but the museum was closed, along with almost all the cafés. We sat by the Garonne for a while, then found a café opposite the station for a coke. We chickened out of the walk back an ordered a taxi to take the weary old batteliers home!

Next stop Damazan – one of our favourites. This time Calliope took the shady mooring on the right bank and we looked out towards the bridge and our previous hotspot mooring on the left bank.

Hidden amongst the long grass and bushes were two concrete bollards, tough enough to hold the biggest of peniches.

We took a couple of walks to areas we had not covered before and discovered, surprisingly in rural France, a cricket club. We also found a lake for swimming and other water based activities. 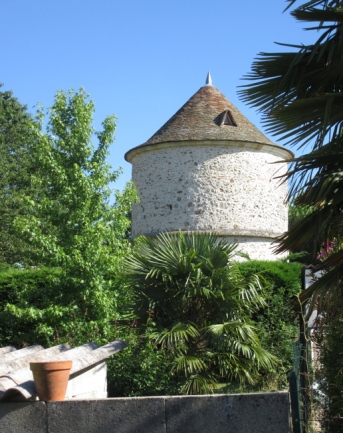 The map at the port mentioned an old dovecote and two lavoirs; I had not managed to locate these previously but now had time to find everything.

Just near the dovecote was another ‘antiquity’ – the old public conveniences! I am pleased to report that they are no longer in official use. 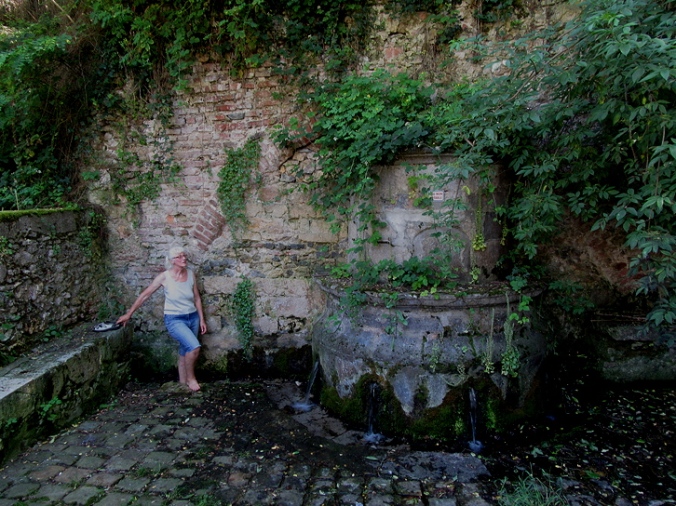 Moving on ….. we discovered that Damazan has two lavoirs, both missed on our first run west. The oldest is next to the Fontaines des Anglaise – seemingly a brick and stone built edifice to help villagers collect water from a natural spring. It was built by les Anglaises, way back in about 1368 during the Hundred Years War; a peaceful cool and shady spot on a hot day.

Just down stream of this is a lavoir and a huge stone trough where livestock were taken to drink and be bathed.

These beautiful watering holes were considered picturesque in Victorian times and led to a few photos being taken with the locals. Picturesque is mixed with truth here, as you realise the tough time women of all ages had getting the washing done. 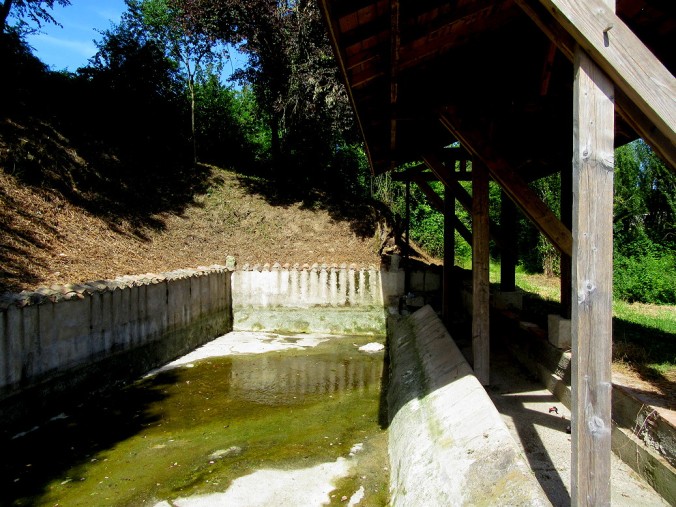 The second lavoir, named L’Escourbet, is out of town on the other side, much more recent, and far less attractive, but I include it here as part of my lavoir report. 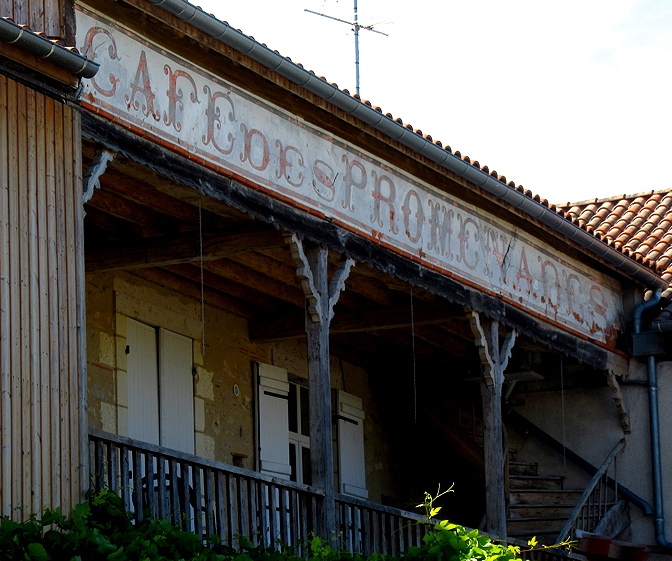 One of many old buildings

You may be gathering that I rather like Damazan. It is one of my favourite villages along the canal. So many lovely buildings to capture on film ( I mean digitally!) The Café des Promenades is at one end of the big ‘place’ where people gather and boule is played.

The war memorial is one of the most poignant I have evener seen and bought tears to my eyes – so many young women will have taken flowers in memory of brothers, boyfriends, sons, husbands lost on the war and this somehow captures the mood.

Next stop Serignac – another favourite. It was a hot couple of days so we made the most of everything that could contribute to shade!

The Bastide is very small, so no new photos of the village, but we happened upon a free concert in the village square, with the bar set up across the church doorway and all ages coming together as a community.

Regretfully I only took my phone to the concert and it was not up to taking decent photos in the dark, but I hope they give a sense of the atmosphere. 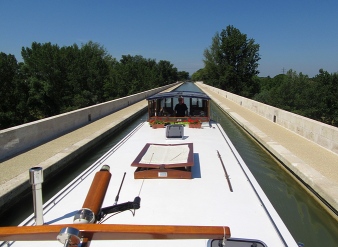 Agen from the viaduct

After a couple of days we continued retracing our wake into Agen and moored up in exactly the same place as when heading West a few weeks before. The weather was so much better on this trip that I took photos again when crossing the Tarn viaduct.

The two days included essentials such as sorting out a SIM, looking at bikes, and going to the market. It was still hot and we were glad of the innovative cool mist blowers attached to some lampposts.

But we also had some fun – a most enjoyable evening out with a couple of beers in the centre, followed by a good Corsican meal in one of the many narrow streets. 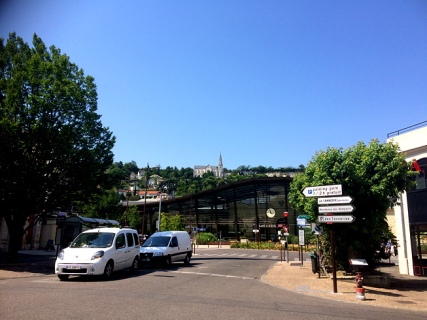 Noticing l’Ermitage from below in Agen

The church at the top

The view from the top

And in a moment of madness on a very hot (30 degrees plus) day walked up the steepest hill I have ever encountered to l’Ermitage. The views across the city and far beyond made it all worth while, even though we could not get to the old houses carved out of the cliffs. (You can just see these in the white cliffs to the right of the church in the first photo.)

After a couple of nights our journey East continued. Stewart started to notice small utilitarian concrete structures at the side of the canal and suggested that they were lavoirs. Initially I dismissed his idea, but then on looking closer I saw that there were ‘soap dishes’ built into them and that they were indeed relatively modern urban lavoirs – this one near Boé 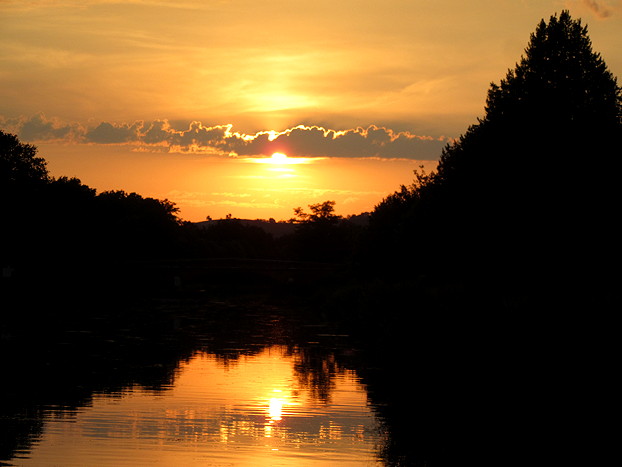 Time to carry on towards Moissac where we were due to meet daughter, son-in-law and granddaughter in a few days time.  We had ideas of mooring up at le lac bleu near Golfech, but were so hungry and ready for lunch that we stopped at a wild mooring 2 kms beforehand …… and decided to stay. We had stopped there before, just outside Lamagestere; this time I added wild swimming to our enjoyment of the place. 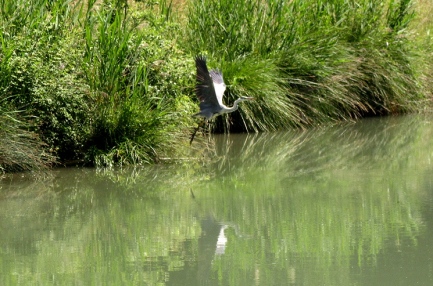 a sting in the tail, I think.

In the morning I noticed a visitor camouflaged amongst the rosemary plant – a huge grasshopper!  Then later I was ready with the camera as one of many herons took off from the bank.

We had walked up to le lac bleu the afternoon before, and loved it! I saw more dragonfly varieties than ever before, a mix of water birds, fishes around my feet as I called them in the water, peace and tranquility! So on our way to Moissac I was treated to an hour’s mooring at le lac bleu with a camera.

Think you might get bored of dragonflies at this point …….. 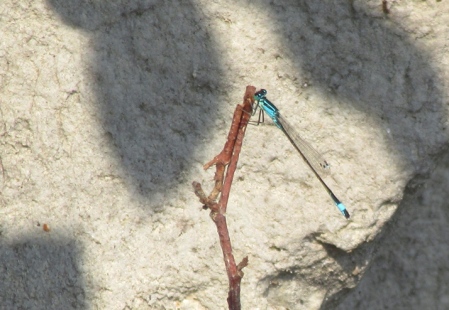 And in addition to dragonflies there were lizards, birds, fish, flowers … my nature heaven!

But on to Moissac and preparations for family arriving – very exciting as we had been longing to see them. The beautiful bridge over the Tarn came into view and we knew we were nearly there.

We moored up next to all the locks, those up to the canal and aqueduct, and those down to Le Tarn. We looked forward to darkness and coolness falling at the end of the day, as temperatures were still up in the thirties, sometimes 38.

Next day we drove to Toulouse airport; daughter, son-in-law and grand daughter arrived, in the blistering heat!  Almost as soon as they arrived I set off to the boulangerie with the young one; we went for bread, she came skipping back with ‘cake-in-a-box’!

Sun hat off, sunglasses discarded, but appropriately plastered up with Factor 50!

The following morning, whilst still cool and allowing parents a lie in, Grandad and Granny set off across the lock bridge to a little playpark in the shade by the Tarn.

The cool of the Abbey doorway

Coffee with a biscuit!

Later we had a Moissac exploration, including the market and the Abbey, with coffee and ice cream in the square and a little picnic in the Abbot’s garden – desperately seeking shade!

We had a cruise plan in place for the holidaymakers which was to set off towards Montech on Monday. But before we could depart we needed to take on board the folding bike that Stewart had ordered online. This arrived at the Capitainerie at about 1130! So after a swift early lunch we were off to enjoy the fresh air and views from yet another viaduct over le Tarn, and the moisture in the air as we went up the chain of locks outside Moissac.

We found a shady mooring half under a bridge near St Porquier for a siesta and a place to dangle our toes in the water – mmmmmmmm! An overnight stop seemed a good idea!

Knowing that Montech market was next day we made sure we arrived in there in time for a quick shop and lunch, prior to floating onto waters new ….

… l’Embranchement de Montech …. the short canal from Montech to Montauban.

That will be the next chapter!