We’re off! It’s been nice having a slow start to the season – we feel that the boat is prepared, the kitchen stocked, and the wine cellar full, but the crew are now restless and wanting to feel the movement of the boat beneath their feet.

We left Castelnaudary and immediately the views South across the plain to the distant hills was beautiful. The plane trees here are still standing, and presumably healthy, providing a traditional Midi atmosphere. 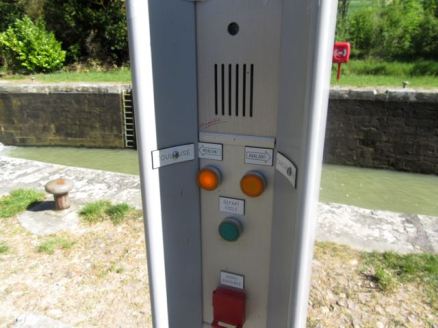 Before long we were at La Planque, our first lock, and waiting for a boat coming up; just as well! We had not realised that on this direction many of the locks are automatic – at least they are automatic once the mariner triggers the mechanism!  A quick lesson for Lesley in button pressing and we were off – me dropped off before the lock, a gentle sprint to the buttons, then a pleasant wait while the lock prepared itself and Calliope entered. 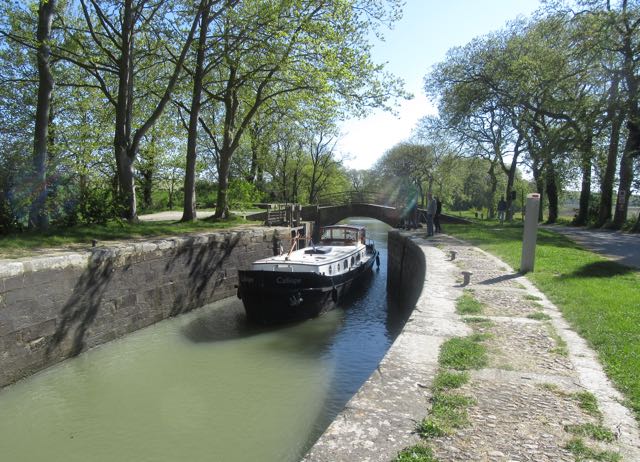 Stu remembered from last year the helmman’s tricks for a Midi lock, steering in with aplomb.  We were soon tied up, more buttons pressed, and Calliope rose on the waters of the canal.

We counted up and realised that there were only another 4 locks ‘among’ until we reached the summit – including a double and a treble. The stepped locks were both ‘manned’, making things easier for us. 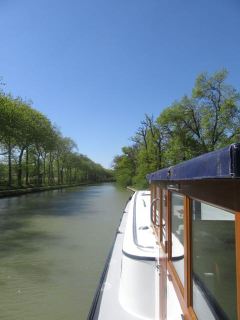 We moored up for lunch at a wild mooing before la Ségala, and realised we rather liked it; so we stayed the night. 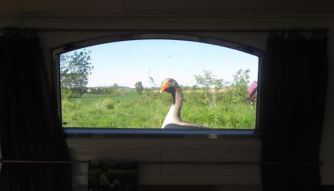 There was entrainment from the pet goose of a local live aboard. He adopted us for a few hours, guarding the barge, following Stewart around, and treating his cooking as a spectator sport, watching attentively through the window.

Next morning, with Labastide-d’Anjou a ten minute cycle away, exercise and bread were provided in equal measure before we set off along the summit stretch, past le Ségala port, bridge and … my first lavoir of 2017.  Not a particularly interesting lavoir, but worth recording just the same.

The five and a half kilometre summit bief is a rural ideally, accompanied by the A61 motorway at almost very turn!  One of the most interesting and attractive points is just before the Ocean ‘going down’ lock. 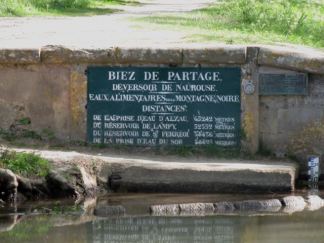 PK 52, the parting of the waters

one side of the octagon 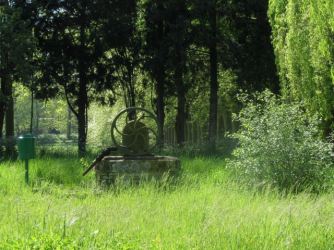 Here at the Narouze pass is the watershed between the Atlantic and the Mediterranean. The fascinating octagonal outline of the original reservoir to hold water for the canal is still clearly visible.

Midi Lock 17 Ocean, first one down

So our downward journey towards the great Atlantic ocean began. Hurrah, a full lock! The first one since the Rhone in August last year; no more rope-hoying for a while . . . . The so called Ocean lock was very pretty, and although automatic we happened to arrive at the same time as a VNF man and he happily took control.

We had decided to stop for lunch somewhere around Port Lauragais so that we could take a look at the Midi museum there ….. which turned out to be closed until May! Nonetheless we had a pleasant meal seated at a picnic table under the trees between a lake and the canal. We walked all around the modern port and although we prefer wilder moorings we could see that the facilities were good. 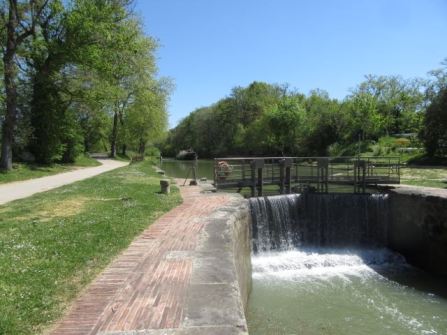 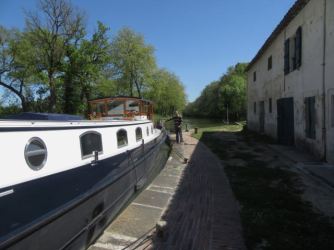 We carried on, enjoying the drop and relative ease of descending locks, through to lock 43, Renneville. This time I remembered the camera and caught some shots of Calliope waiting, then entering the lock.

There was just space for us on the mooring below the lock so we tied up and began to enjoy another sunny afternoon and evening. 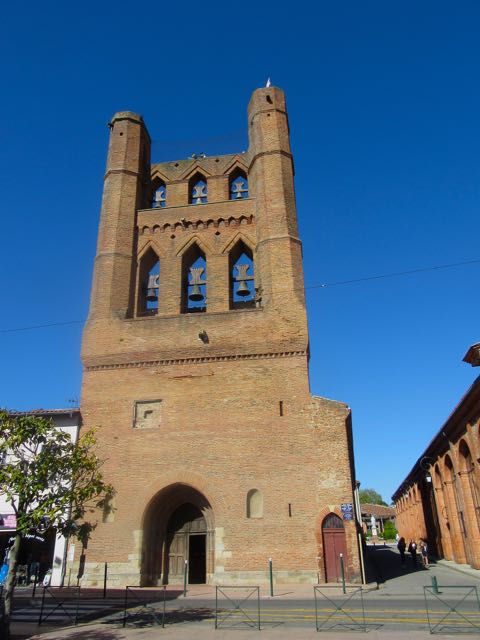 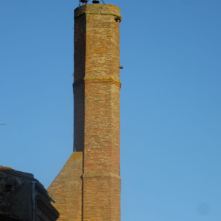 First I went for a walk up (and I do mean UP) to the village where I found a lovely church with a brick built wall bell tower. I have since found out that the brickwork is the vernacular style in this region – hence these three church photos – Renneville, Villefranche-de-Lauragais and Gardouch.

The canal at Renneville 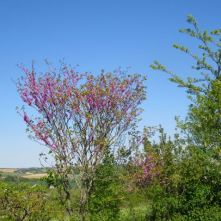 The first evening was so pleasant at Renneville that we stayed on for a second night. A quick cycle trip to Villefranche established a good set of boulangeries, restaurants and supermarkets so our immediate needs were well catered for.

Along with the usual daily bread we also needed a suitable venue for a relaxed anniversary celebration. We walked into town on a lovely sunny Spring evening and found a PMU style bar and a Cambodian restaurant that suited us just fine.

Whilst in Villefranche we discovered a little more vernacular architectural ironmongery – little hinged metal figures  designed to hold open window shutters. Looking at these in Villefranche, Gardouche, and later in Montgiscard I think there are two or three main characters – often with a male and a female figure on either side of a window. I’ve had a quick look on line but cannot find any information … anyone know?

We managed to contact the port at Toulouse whilst at Renneville and had a change of plan after discovering that we could not be accommodated yet. So Stewart sent me ahead by bike to see what other moorings were in store for us.
Only 4km along the canal I found the delightful wharf at Gardouche. A quick phone call to Stu and he and Calliope meandered on downstream to rendezvous with me and the bike.

Stu and I had a blue sky 3 day weekend at Gardouche, with very few boats passing and only one mooring up one lunchtime for a couple of hours to allow a group of hungry Hungarians time for a pizza. 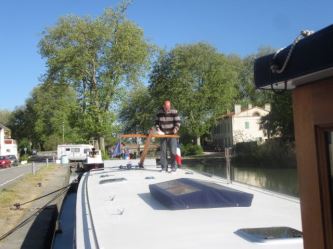 Metal cleaning for me

We used the opportunity for a bit more maintenance – Calliope feels like the Forth Bridge sometimes! 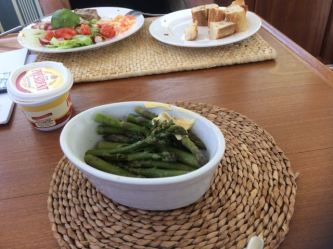 There was time to steam delicious local asparagus for one lunch, and make asparagus soup for another. 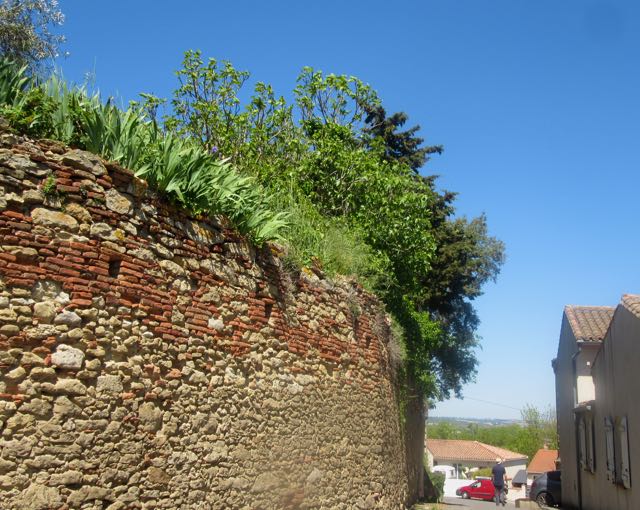 The church from behind 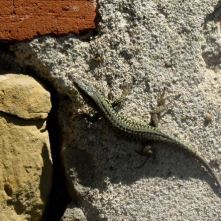 The church from below

There was time to wander round the (small) village a few times, seeing the dominant hilltop church from many angles, and even visiting a jumble sale!

The mooring was most enjoyable, generally quiet, though the quay acted as a car park for the many people who understandable wanted to walk and cycle the canalside on such a sunny weekend. Sitting on the back deck with breakfast, ice cream, beer, or just surveying the start of our garden, was tranquil and warm. 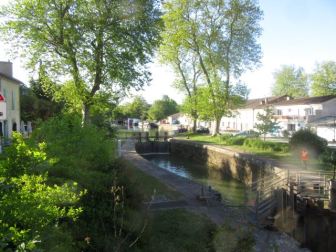 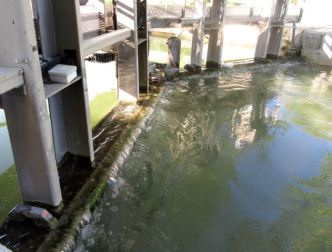 Finally it was time to leave and to descend the Gardouche écluse. I went ahead to prepare it – well press a button that would automatically prepare it – no physical exertion required!

We continued on through the double écluse at Laval, managed by a happy young female éclusier, and on to Négra. We noticed that the drop here was 4m – not much compared to the Rhone, but more than we had experienced in most automatic locks.

While the lock filled I took the opportunity to look around at the little chapel, stable block and other buildings – once all linked to a passenger boat staging post, but now mostly used by Locaboat boat hire company.

At the next manned (double) lock at Sanglier we learnt that several of what had been double locks have been changed to be just one deep lock, with the original second lock chamber remaining full at al times. They now act as kind of waiting rooms, or ante chambers to the lock when you are on your way down. 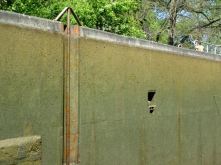 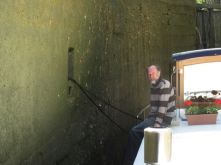 Our first experience of these deep single locks was only 1.5 kms away at Ayguesvives. You can just see in the photo above left that there is an oval lock shaped ‘pond’ behind us. As Calliope floated down and the wall of the lock emerged we discovered bollards within the wall and poles to allow mooring lines to slide down with a boat – both probably remnants of past times and big commercial barges. Captain’s note to self – must change the jumper next time the crew gets a camera out . . . . 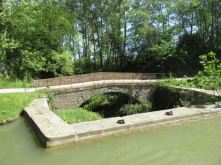 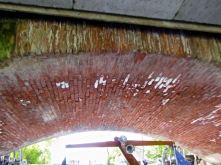 Of course locks are not the only features along the way. Bridges and aqueducts slide past, many absolutely beautiful.

Stone steps to the boat

By 1230, after three and a half hours of cruising and descending we arrived at our hoped for destination of Montgiscard – and yes, our luck was holding. The lovely high wall, only long enough for one big boat, was empty and we tethered Calliope to the shore before having lunch. Lovely mooring, complete with a free water fill-up and our own front steps. 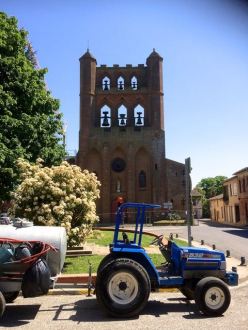 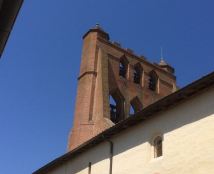 An afternoon wander round the town, another perched on a hilltop, displayed another great brick church in a rural community and some ancient narrow streets. We found Joan of Arc hiding amongst some trees, a long way from home.

From across the water

Also, much to my delight, the town lavoir still exists – right next to our mooring. I think I have worked out my love of these structures; I think they speak of ‘community’, a place where the women of towns and villages met, talked, worked, and supported one another too I am sure.

I suspect they also met around the pump, although that is located at the lock maybe it was more for the thirsty men, horses and dogs from the working barges.

We stayed just one night, being booked on at Toulouse the next day. Montgiscard écluse is one of the double-cum-single locks, now a single drop of almost 5m. Stewart fancied a go at setting the fill-up in motion for a change. Hard work all this button pushing; thank goodness I’ve got good crew . . . . 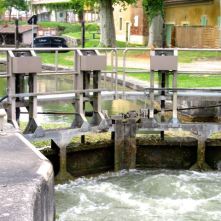 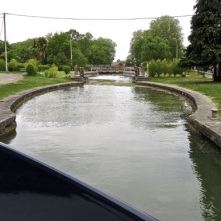 It took a while for such a deep lock to fill; a treat if you like moving water. I love it! I never tire of watching locks fill and empty – the eddies, foam, spurts and ripples.

This was our first real slog of 2017 – and still only 20 kms and 3 locks! Nothing compared to last year. We set off at 9am confident of reaching Toulouse in time for lunch. Little did we know.

We passed under the striking brick bridges of Donneville and Deyme, commissioned by Riquet when the canal was first started in 1667, and of brick due to the lack of stone quarries in the Toulouse area. These bridges were restored in 1821 after having been blown up a few years before to protect retreating troops at the Battle for Toulouse.

Nesting amongst the bricks

Unfortunately one of them seems to be under attack again!  But birds are making homes amongst the holes in the brickwork. 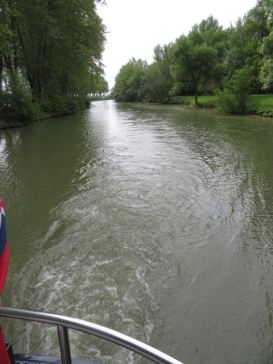 We were passed by very few boats, but often surprised by the lack of care other boaters had for the banks for the canal, causing quite a wake. We were proud of the smooth waters astern.

What caused us a little hassle and quite a delay was finding the next two locks both ‘en panne’, or broken. The VNF are great at coming to mend them, but one does have to wait for them to come.

However, on the plus side, we had picked up three lovely Americans, on a long distance walk, and offered them a chance to experience a bit of barging. So we had longer to chat to them. 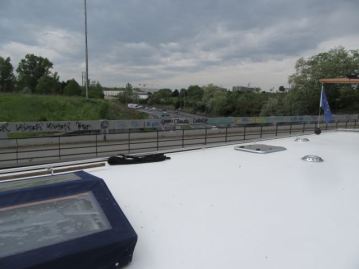 At last we were coming through the suburbs of Toulouse, past fascinating old barges now used as houseboats. We also had the new experience of an aqueduct over a busy road – usually they are over rivers and streams. 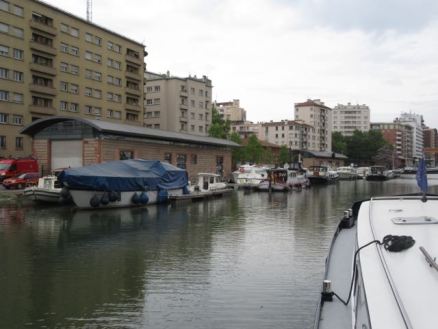 At last the port of Saint Saveur came into view, and our hammerhead position was clear. We tied up without too much fuss, and relaxed for a while. 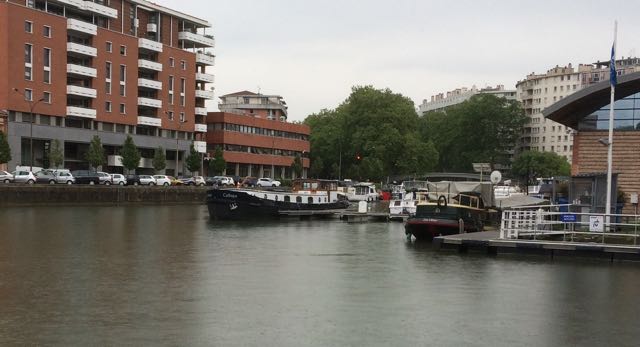 Yes, seems like an ok mooring – lets change the two nights to three if they will have us! 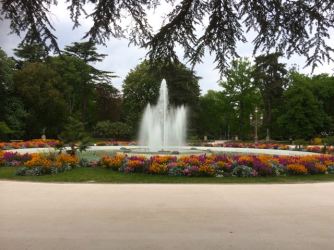 To round off rather a grey day – the first clouds we have seen for ages, we took a short walk round our immediate part of Toulouse, including the Grand Rond garden. Rain began to fall, so back to the boat for a cold beer, bit of supper and a planning session for our explorations tomorrow.

4 thoughts on “Remainder of the Midi – L’Oestward to Toulouse”